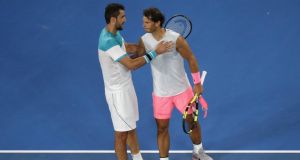 Marin Cilic of Croatia and Rafael Nadal of Spain embrace after Nadal retired from their match at the Australian Open. Photo: Toru Hanai/Reuters

Rafael Nadal called for the tennis authorities to think about players’ long-term health after retiring from his quarter-final against Marin Cilic at the Australian Open because of a leg injury.

The world number one looked to be on his way to yet another grand slam semi-final when he moved two sets to one in front but he called for the trainer after going a break down in the fourth set.

Nadal took a medical time-out but was clearly hampered in his movement and, after limping around the court for two games at the start of the fifth set, he headed to the net to shake hands.

The only previous time in his long career that Nadal has failed to finish a slam match came in the quarter-finals here against Murray eight years ago, while he also suffered a back injury in his 2014 final loss to Stan Wawrinka but completed the match.

With Novak Djokovic hampered by an ongoing elbow issue in his loss to Chung Hyeon on Monday and Murray failing to make the tournament because of hip problems, Nadal believes action needs to be taken to make the tour less gruelling.

He said: “Somebody who is running the tour should think a little bit about what’s going on. Too many people are getting injured.

“I don’t know if they have to think a little bit about the health of the players. Not for now that we are playing, but there is life after tennis. I don’t know, if we keep playing on these very, very hard surfaces, what’s going to happen in the future with our lives.”

After limping slowly into the press room, the 31-year-old said of his injury: “I started to feel the muscle was a little bit tired in the third set, but I was playing normal, no limitation.

“Then in the fourth, one movement, one drop shot I think, I felt something. At that moment I thought something happened, but I didn’t realise how bad.”

Nadal looked utterly dejected at his body letting him down yet again. “Tough moments,” he said. “It’s not the first time an opportunity is gone for me. I am a positive person, and I can be positive, but today is an opportunity lost to be in the semi-finals of a grand slam and fight for an important title for me.”

It is a fifth grand slam semi-final for Cilic, who has gone on to reach two finals, winning the US Open in 2014 and losing in the final of Wimbledon last summer to Roger Federer.

Cilic said: “In the end it was very unfortunate because Rafa is always fighting really hard, always giving his best on the court. He played a very good tournament. Obviously it’s very sad for him to finish the way he did.

“I’m extremely pleased with my own game. Even in these other matches before this one, I played great tennis.”

Cilic and Edmund have met once before, at the Shanghai Masters last October, when the Croatian won in straight sets.

“For me, it’s another good opportunity. Obviously on paper it’s probably easier to play him than Rafa. But still he deserves a lot to be here at the spot where he is.”

Castrogiovanni remembers ‘beautiful battles’ with Ireland 05:15
Frank Lampard defends Chelsea’s rearguard ahead of Sevilla clash 05:00
Stockdale and Ringrose on board with expansive Irish game plan 01:30
Bennett girding his loins for impossibly unpredictable Vuelta 01:01
Captain Fernandes for Man United as PSG look for revenge 22:30
Here is your handy guide to sport on television this week