Brendan Boyce walks the walk in searing heat of Doha 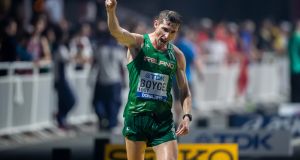 Preparing without fail for sweltering heat and humidity is one thing; enduring it without fail for over four hours is something else, and Brendan Boyce scored on both fronts with his sixth place in a 50km race walk that again questioned the sense of staging the World Athletics Championships in Doha.

It was already clear Qatar is no country for championships athletics – far from it – not just because of the conditions but also the small crowds inside the Khalifa International Stadium.

Starting at 11.30pm local time, Boyce walked into the early hours of Sunday morning on the mostly empty Doha waterfront in what was a typically turbulent race, duly rewarded for the completeness of his effort in what is likely to be the best Irish performance in Doha.

Coaching by 2013 World Champion in the event, Rob Heffernan, Boyce finished the 50km distance (or 31 miles in old money) in 4:07:46, briefly turning around at the finish to moonwalk over the line, such was his delight.

The women’s marathon, run into the morning before, saw the starting field of 68 reduced to 40, that race was won by Kenya’s Ruth Chepngetich in 2:32:43, over five minutes slower than London two years ago.

Of the 46 men who started the 50km walk, 18 were either a DNF or a DQ. From the Finn Valley club in Donegal, Boyce bided his time along the 2km loop, crediting Heffernan’s input at the finish.

“It was hard alright,” he said, “but I totally zoned out for the first 40km, as if it was a training session, then turned it into a 10km race, and that’s the way it turned out,” said Boyce, who gradually moved up through the field over the final 10km. “I just started picked people off then, the race plan was perfect, and Rob made sure I was confident in what was doing, and everything was just bang on.”

The heat didn’t take from his sense of humour: “Being Irish, we just love misery so 50K is perfect for me. Being out there for four hours, Misery is happiness. The 50km walk is a unique event in athletics, and I just love it.”

Yusuke Suzuki became the first Japanese walker to win a world title, making a bold move in the early stages to build a lead that largely went unchallenged. Portugal’s Joao Vieira, at the age of 43, came through to finish second, becoming the oldest medallist ever at the World Championships.

Boyce had followed Thomas Barr’s closely fought race for a place in the World Championship 400m hurdles final earlier in the evening, only as hard as he tried to reach out he couldn’t quite grab it. After pouring every last ounce of effort in the final metres Barr finished fourth in a season best of 49.02 seconds, .05 of a second off Japan’s Takatoshi Abe in third.

The top two places went to two of the gold medal challengers, the American Rai Benjamin taking the win in 48.52, with home favourite Abderrahman Samba taking second in 48.72: not beyond Barr’s range, but on the day it just wasn’t to be. His 49.02 still left him 10th best overall in the event.

Mark English missed out on progressing from his 800m heat, committing himself to the front from the gun, opening a five-metre lead on the rest of the field, only to fade completely over the last 200m, ending up seventh in 1:47.25.

Saturday night also saw the men’s 100m final, and it wouldn’t be a proper race to decide the fastest man on earth without the need to suspend some credibility. Two years after Justin Gatlin beat Usain Bolt in the event that was billed as Good versus Evil, Christian Colemen prevailed against the backdrop of Good versus Mindless.

Coleman won silver in between Gatlin and Bolt in London two years ago, the 23-year-old American clocking 9.76 seconds here after a flat out 100m race without any indecision from the starting gun. Coleman finished clear of Gatlin, the now 37-year-old who continues to defy the age barriers of global sprinting taking silver in 9.89, with the Canadian Andre De Grasse running a personal best of 9.90 in third

Last month, news broke that Coleman was in danger of missing the World Championships for three whereabouts failures – essentially, missing three drug tests – in a 12-months span, which typically results a two-year ban.

However Coleman, due to a technicality that allowed him to backdate his first failure before the 12-month window, was cleared: “At this point I’m kind of tired of explaining the situation to certain people who aren’t necessarily interested in the truth,” he said.

Another opening performance that turned some heads was Sifan Hassan, a 1,500m specialist, winning the 10,000m in 30:17.63, the Dutch woman running her last 1,500m in under four minutes. That is properly hot running.

* Kevin Seaward ran the fastest Irish men’s marathon time in 17 years in Berlin, improving his best to 2:13:39, the race won by Ethiopia’s Kenenisa Bekele who in an astonishing return to form clocked 2:01:41, just two seconds short of the world record run by Kenya’s Eliud Kipchoge’s 2:01:39 in the same race last year.