Mercedes’ Wolff hails Hamilton after his record win in Portugal 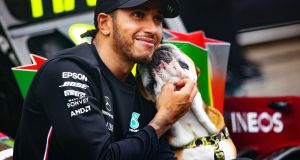 The Mercedes team principal, Toto Wolff, has paid tribute to Lewis Hamilton after he surpassed Michael Schumacher’s record of Formula One race victories.

In winning the Portuguese Grand Prix on Sunday Hamilton racked up his 92nd, and Wolff believes his driver’s achievements may not be fully appreciated until after he retires.

Indeed the former Labour cabinet minister Lord Hain has described as “unacceptable” Hamilton’s omission from the current list of sporting greats who have received a knighthood.

Hamilton joined Mercedes in 2013, the same year as Wolff, and the pair have built a very close relationship. Hamilton recorded 21 of his wins for his first team, McLaren, but has 71 for Mercedes. Since the turbo-hybrid era began in 2014, he has at least 10 wins a season with the exception of 2017, when he secured the title with nine victories.

“I am never getting bored of questions about Lewis,” Wolff said in Portimão. “Because in 10 or 20 years we will look back and really acknowledge what a special driver he is.”

He went on to reiterate this opinion to the BBC on Monday. “When you look at accomplishments there are two drivers that stand out. That is Michael in his generation and Lewis this time. Sometimes you only realise after his career has ended what his actual achievements were.”

Hamilton leads Valtteri Bottas by 77 points in the world championship and can secure the title in the next two races. The first is at Imola this week and if Hamilton finishes the following one, the Turkish GP, 78 points ahead he will take the championship with three rounds to go and equal Schumacher’s record of seven titles.

After Hamilton won his sixth title last year, Hain wrote to Boris Johnson making the case for an upgrade on the MBE awarded to the British driver 12 years ago. But the 35-year-old’s achievements were overlooked in the subsequent new year honours list.

“You have got Andy Murray, Mo Farah, Bradley Wiggins who have all been given knighthoods in recent years, and I cannot understand why Lewis Hamilton hasn’t,” Hain, who is vice-chair of the All Parliamentary Group on F1, said on Monday. “Frankly, it is unacceptable.”

Hain confirmed he intends to write a second letter to Downing Street when Hamilton secures his seventh title. But he said: “I don’t think it needs a letter from me to be frank. It should have happened already and it needs to happen now.”

Hamilton has yet to renew his contract with Mercedes that finishes at the end of this season but has repeatedly insisted he expects it to be concluded without complication. Wolff has yet to agree his new deal with the team either and has yet to confirm whether he will continue in the central role as team principal, but is confident any decision on his part would not affect Hamilton’s future.

“We have no concern, there is no reason he wouldn’t want to be in the quickest car, and we want him in the car, so it is a perfect match,” he said. “We are a good team the two of us, but if I was to go there is a fantastic groupof people at Brackley and Brixworth and they would do pretty well without me. He needs to continue his career and if we can do it together that would be wonderful.”

Mercedes are also poised to make history. They lead Red Bull by 209 points and can win the constructors’ championship at Imola. If they do so it will be their seventh consecutive title, beating the record Ferrari heldset with itstheir run from 1999 to 2004. – Guardian