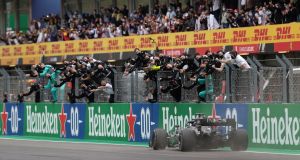 Lewis Hamilton has won the Portuguese Grand Prix and beaten Michael Schumacher’s record of Formula One victories by securing his 92nd career win.

The world champion delivered another exhibition of control, managing his race magnificently to become the most successful F1 driver of all time in terms of race wins. His Mercedes teammate Valtteri Bottas was second, and briefly led but proved unable to live with Hamilton’s pace. Max Verstappen was third for Red Bull, with Ferrari’s Charles Leclerc an excellent fourth and there was a superb fifth for Pierre Gasly in the AlphaTauri.

Hamilton once more delivered a masterclass to ensure he stands unmatched in his collection of victories. Recovering from a testing start when he lost places on cold rubber, he kept his composure and put his head down to manage his tyres to perfection. The track surface lacked grip and was a challenge but Hamilton had its measure, exploiting the additional pace he was able to eke out from not overworking his rubber to retake and then hold a significant lead over Bottas.

Talking to his team shortly after the success, Hamilton said: “I couldn’t have done this without all of you. Thanks so much for continuing to believe in me and striving for perfection, it’s an honour to work with you.”

Portugal has not hosted a grand prix since 1996, when Jacques Villeneuve won at Estoril in doing so making a memorable pass on Schumacher. This time at the Autódromo Internacional do Algarve Hamilton showed the exquisite race management that the great German so often exhibited.

Coming to terms with the 2.89-mile circuit, which was hosting its first F1 race, has been tricky all weekend but Hamilton was on rails through the undulations of the hills of the Algarve’s glorious rollercoaster.

It has taken him 262 races to reach his remarkable 92 wins to surpass Schumacher, having scored his first at Canada in his debut season in 2007. Now 35, his consistency since then hugely impressive. He is the only driver to have taken a win in every F1 season in which he has competed, now stretching across 14 years.

Since Mercedes picked up strength when the turbo-hybrid era began, he has been ruthless in taking every opportunity and returning an extraordinary success rate. He has 71 victories for the team and, bar 2017 when he took the title with nine wins, has scored 10 or more a season every year since 2014.

He is well on course to do so again this year with eight already under his belt, putting him within touching distance of equalling Schumacher’s greatest record: seven F1 titles. Hamilton now leads Bottas by 77 points. If he is 78 points ahead after the Turkish Grand Prix, which follows the next round in Imola, the title will be secure.

Mercedes’ dominance this season has put them within touching distance of the constructors’ championship and they could well seal it at the next round in Imola. A seventh title in a row would beat the record held by Ferrari, the Scuderia taking six titles between 1999 and 2004.

Hamilton made a clean getaway from pole holding his lead but the British driver was struggling for grip on the cold medium tyres and was passed by Bottas who took to the front though turn seven. McLaren’s Carlos Sainz – on the quicker soft tyres – also charged though, passing Hamilton for second and then on lap two Bottas, for the lead, as rain began peppering the circuit and the grippier rubber was really making a difference.

Tyre temperature had been key on the opening laps and with the rain holding off, the field settled as the rubber came up to speed. With heat in his tyres Bottas swiftly turned up the wick, passed Sainz to retake the lead on lap six and Hamilton promptly joined him to take second.

Normal service resumed at the front as the two Mercedes began opening a gap, while Hamilton stayed close to his teammate. Verstappen was swiftly dropped in third, the two Mercedes line astern with a two-second gap, but Hamilton upped the ante, pumping in some fastest laps to close on the Finn.

Hamilton had not worked his tyres quite as hard as his teammate and made the most of it. On lap 18 he was on Bottas’s rear wing and he swept past two laps later on the straight using DRS, clearly enjoying better grip. He immediately made hay, dropping Bottas, whose rubber was blistering while the world champion felt his tyres were in fine fettle. He had opened a seven-second gap by the midway point, an age on his rival in the same machinery. Mercedes pitted him on lap 41 with a full 10-second lead.

Bottas followed a lap later, once more resuming their places out front but the race was done. The front-running pair began trading fastest laps but Hamilton’s lead was never in doubt. He took the flag 25 seconds ahead, his record secured in appropriately dominant style.

Carlos Sainz was sixth for McLaren, Sergio Pérez seventh for Racing Point. Renault’s Esteban Ocon and Daniel Ricciardo was in eighth and ninth and Ferrari’s Sebastian Vettel in 10th. - Guardian