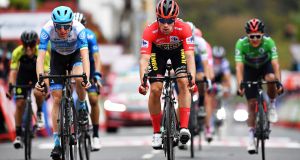 They finished down along damp and slippery asphalt that might normally have been melting hot and once again Dan Martin had his handlebars to the fore, grabbing another third place and the time bonus that moves him up to second overall in this strangely belated racing of the Vuelta a España.

Indeed strange in many ways – the usually dry heat of August replaced by the magnificent colour of October – with another unexpected bonus for Martin: he takes over the green jersey for at least Thursday’s Stage 3, given the actual leader Primoz Roglic will wear the red jersey, and Richard Carapaz, second in that points classification, will wear the king of the mountains jersey.

Just like he did in Tuesday’s opening stage, Martin put himself at the front when it mattered, among nine riders that opened a small advantage on the main chasing group on the bumpy concrete slabs up the Alto de San Miguel, the stage then dropping down another 16.5km to the finish at Lekunberri, nestled in the heart of Navarre.

By then Marc Soler had broken off the front, making his move with some 10km to go, giving the 26-year-old Spaniard a first stage win in his home Vuelta - and only a second win this season for his Spanish team Movistar, another bonus for them being the 151km stage started in Pamplona, where they are based.

Then came Roglic, team Jumbo-Visma’s defending champion from Slovenia, second to the line 19 seconds back, and half a bike ahead of Martin, who took third; with six and four second time bonuses each, Roglic now increases his overall lead to nine seconds on Martin, who leaped ahead of Carapaz, who finished in fourth, and now sits in third (two seconds behind Martin).

With the red and green jerseys much closer aligned than the Tour de France, Roglic also leads the points classification (on 45 points), ahead of Carapaz (34), the Equadorian rider from team Ineos Grenadiers also taking the lead of the king of the mountains - which means Martin, on 31 points in third, gets the wear the green jersey for as long as those two riders lead the other classifications.

For Sam Bennett, who may yet come into contention for the green jersey even with so few flat stages, the mountainous Stage 2 was again conquered with relative ease as he finished in the group 15 minutes and 26 seconds down, in 82nd position, well ahead of two-time previous winner Chris Froome (who trailed in 18:44 down, in 108th), the 35-year-old looking a pale shadow of the rider he once was.

For Martin, who turned 34 in August and whose previous best in the Vuelta was seventh overall in 2014, the demanding route is clearly to his liking, and with the full support of his Israel Start-Up Nation he seems intent on retaining a podium position all the way to Madrid on November 8th.

“It was actually a day I was a little bit worried about, because there was a hell of a lot of wind,” he said. “Last night we had a tree blown over in the car park of our hotel, so everyone was very nervous, it’s days like this you can lose a lot of time.

“But Reto (Hollenstein) did a great job to protect me in the wind, and we got ourselves into the front split when Movistar attacked, and I’d good legs on the climb then, and got to follow. “We just kept on the GC leaders and waited for the sprint. The team Movistar and Jumbo had numbers there, and in that situation it is difficult to attack for the stage victory, but I just waited and waited, and I think third is a really good result again, and we’re definitely on the right track in this race.

“Thursday is another day, it’s important we stay concentrated and don’t get carried away, and enjoy these results. It’s only takes one bad day to lose your place in the General Classification, so every result we can make, the longer we can stay in the front, and all that is definitely a good experience for the team. At the moment I do feel my legs are in great shape but we don’t know how long it will last. But we’re enjoying it.”

Thursday’s Stage 3 is again mountainous, with another summit finish at Laguna Negra, before Bennett will likely get his first crack at a bunch sprint on Friday’s most flat run into Ejea de los Caballeros.