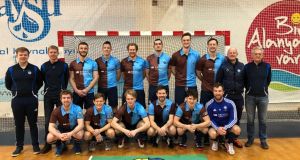 Three Rock Rovers indoor coach Liam Canning said his side were “no longer a bobsleigh team” after they preserved Ireland’s place in the second tier of European competition with a 5-4 rollercoaster win over Switzerland’s Rotweiss Wettingen.

Canning has been driving the club’s commitment to the code for over a decade, describing some of their first European forays as akin to the Jamaican crew from Cool Runnings.

But back-to-back promotions brought Rovers from the lowest rung to the Club Indoor Trophy level this weekend and, after plenty of early jitters, they found their feet at the right time to record a highest Irish placing since Avoca in 1995.

Three heavy group defeats saw Rovers drop into the relegation pool. A much improved performance against Portugal’s AD Lousada, though, ended on a hollow note as a last-minute concession meant a 1-1 draw.

It meant only a win would do against Rotweiss on Sunday morning but that looked to be slipping away when they trailed 4-3 with six minutes to go.

James Walker, however, notched an equaliser before Jody Hosking summoned his second of the game for a 5-4 lead with barely 120 seconds left.

Within moments, the Swiss won a penalty stroke but goalkeeper Stephen West was awesome throughout the competition and he kept out the chance to preserve the result.

“There was all sorts of drama but, to be honest, Westy had saved four out of five strokes over the weekend so there was sort of a surreal calmness!” Canning said of those heart-stopping final moments.

“We were defensively really tight in the last two games and we should have got something more from the Portuguese game. We were pretty profligate in front of goal but today we were far more measured.

“It’s a typical Irish thing; we just started to play well and then the tournament is over and that’s it for another year.

“It has been a long haul and to be able to stay up is a vindication of the things we do in a small hall in St Columba’s with, at times, very little opposition. Here, we were driven to our utmost and we reacted.”

On home turf, Lisnagarvey stretched their lead out to eight points at the top of the men’s EY Hockey League with a 5-2 win over Pembroke combined with Banbridge’s 4-3 success over second-placed Monkstown on Sunday.