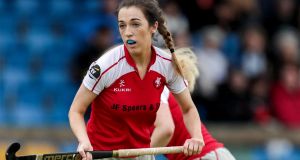 Lucy McKee: scored both goals for champions Pegasus in the 2-1 away win over Railway Union. Photograph: Laszlo Geczo/Inpho

It didn’t take Pegasus long to reclaim top spot in the Hockey League.

Having been overtaken in the table a week ago by Loreto, their win over Belfast Harlequins last Wednesday followed by Saturday’s 2-1 victory over Railway Union returns them to the summit and puts them two points clear of the Dublin side. Loreto do, though, have a game in hand.

Lucy McKee gave the reigning champions a fifth-minute lead against Railway at Queens, but Kate Lloyd equalised for the visitors within three minutes. The scores remained level for another half an hour when McKee got what proved to be the winning goal, converting from the tightest of angles.

Loreto, meanwhile, were held to a 1-1 draw at Beaufort by Pembroke Wanderers, the team that beat them in the opening fixture of the campaign – Loreto’s only Hockey League defeat all season. Gillian Pinder put Pembroke a goal up but her international team-mate Nicci Daly levelled before half-time, and there were no more scores.

A week after beating Pegasus on their own patch, Old Alexandra picked up another win in Belfast, Millie O’Donnell and Jeamie Deacon getting first-half goals that ultimately proved enough to take the points, bottom club Harlequins only snatching a consolation score at the death through their captain Linzi Hamilton.

That made it four wins and a draw for Alexandra from their last five games, making them serious title contenders now. They’re just a point behind Loreto and three adrift of Pegasus, but with a game in hand on the leaders.

It proved to be a fruitful weekend for the Hockey League’s two Munster clubs, both of them overcoming the elements and their opponents to win their games in Dublin.

Cork Harlequins withstood relentless pressure from UCD at Belfield, the students peppering their goal with efforts from penalty corners and open play, but a superb defensive display along with a first-half Yvonne O’Byrne goal gave Harlequins the points to lift them four clear of the relegation zone.

Catholic Institute are just a point behind them after picking up only their second win of the campaign, all the goals in their game against Muckross coming in the third quarter. Laura Foley gave the Limerick side the lead, Sarah McAuley equalised for the home team, before Naomi Carroll sealed the victory for Institute.