Mayweather v McGregor will be a fierce, entertaining . . . fight of words 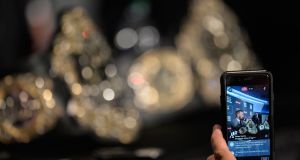 Few in sports are taking the Floyd Mayweather-Conor McGregor fight seriously. Why should they? As boxer Lennox Lewis told ESPN this week: “Mayweather is the best in his weight class, no one can touch him in boxing. He’s a pugilist of the highest order, so for another man from another sport to fight him?”

But people will buy. They will buy big. They will buy a lot. They will spend $100 on pay-per-view if that’s what it takes. They will drop $4,000 or $5,000 a ticket and fill Las Vegas’s T-Mobile Arena and even grab a handful of officially-licensed T-shirts emblazoned with the fighters’ snarling faces. They will buy as if McGregor v Mayweather is the event of the year. Because to millions of people that’s what this will be.

And yet what they purchase will not be a fight. It will not be punches or footwork or technique. Mayweather-McGregor has little chance of being much more than two men prowling the ring’s corners, milking the clock without striking too many blows, stretching the night to maximise profit.

No, what millions will buy into is something that will already have happened in the weeks before August 26th. They will be splurging on a fight of words. Mayweather and McGregor are the greatest self-promoters in sports today. They have a way to part people with their hard-earned cash like no one else.

Nobody alive turns up pre-fight rhetoric like McGregor. He has some of the quickest hands in the octagon but his mind spins faster. He is at his best with a microphone in his palm and an adoring audience at his feet. When he is on, when he breathes deep, conjuring insults from the bottom of his belly he can eviscerate hulking, tattooed gladiators with a verbal onslaught that is at once so raw, profane and clever he renders them stupefied.

One of his finest moments might have been the press conference before his first Nate Diaz fight at UFC 196. That was the day he told Diaz he was “a lion” and would eat Diaz’s “carcass” “alive” in the cage.

“As the fight draws closer, he’s like a scared little boy, trying to pass the spotlight off, trying to pass the spotlight to me,” McGregor said that day sitting at the same dais as speechless and oratorically overmatched Diaz. “He’s trying to pass the limelight. That’s what a man does when he’s scared. He shies away and passes it on. Before he said he was going to do this and do that to me and now that we are sitting here he is saying absolutely nothing. He has a bully mentality until a real man shows up. Like Mike Tyson said: ‘He’s scared of the real man.’”

To which a stammering Diaz could only meekly reply: “F**k you. What do you think of that?”

Give McGregor a few of these open sessions with a live microphone and he will generate mountains of intrigue for a fight that has little hope of being more than a one-sided carnival act.

Years ago Mayweather transformed himself, turning an earnest, gifted boxer into a sensation he called “Money Mayweather”. Much like McGregor, Money Mayweather talked about earning outrageous riches and flashed gold like a common currency. He too shouted and showed a preternatural gift for knowing when the red lights had clicked on and the cameras were rolling.

Floyd won with his fists. Money took the show, filling the pot, stuffing the bank with hundreds of millions of dollars. He tore apart his opponents in the weeks before their bouts, famously calling Genaro Hernandez “a piece of garbage” slaying Arturo Gatti long before they met in the ring; all of it in the name of old-fashioned exhibition. If McGregor has an equal in crass, boorish blather spilled in a burst of spittle it is Mayweather. They’re a pair of crowing roosters who know how to fill the silence before walking in a ring.

Their fight won’t settle any arguments about the superiority of boxers or MMA fighters. It won’t say which sport is king or signal which one now owns Las Vegas or any other fight capital around the world. Their battle isn’t the ultimate bout of cage versus ropes or octagon against square. There’s really only one true fight in Mayweather and McGregor’s grab for a dump truck filled with cash. It’s a two-month clash of mouths.

Take a good look as they don 10-ounce thesauruses packed full of slander. That’s the fight everybody’s going to be buying. Too bad it will be over by the first bell’s ring.