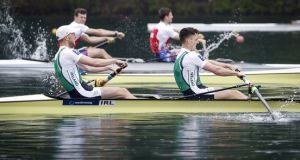 Mark O’Donovan and Shane O’Driscoll won their third gold medal on the trot as they again overcame Britain to win the final of the lightweight pair at the World Cup Regatta in Poznan, Poland.

This was a three-boat race, but there was a good battle at the head of the field between Britain and Ireland. Despite leading for most of the 2,000 metres, Ireland were not sure of winning until they crossed the line less than a boat length ahead of the crew which bettered them last season.

This year O’Donovan and O’Driscoll had already taken gold at the first World Cup in Serbia and at the European Championships in the Czech Republic.

Denise Walsh took silver at both those events, but she could only finish sixth in a topsy-turvy final of the lightweight single sculls. Walsh took third in the faster of the two semi-finals, won by European champion Emma Fredh, with Mary Jones of the United States second. But come the final, Joanna Dorociak of Poland set the pace, eventually yielding gold to New Zealand’s Jackie Kiddle. Switzerland’s Patricia Merz took the bronze.

Earlier, Monika Dukarska and Sanita Puspure had set up a shootout in the women’s single sculls B Final on Sunday. Both finished fourth in their semi-finals. They will compete in lanes three and four in the race (9.10 Irish time).

The Ireland pair of Aifric Keogh and Aileen Crowley, making their own debut at this level also have a B Final shootout - they take on the United States at 8.30 Irish time.

The big race for Ireland on Sunday is the lightweight double sculls final (10.03), where Paul O’Donovan and Gary O’Donovan hope to take their second medal this season following the silver at the European Championships. This has a class field, with Olympic champions France and Olympic silver medallists Ireland joined by Poland, Germany, China and Japan.