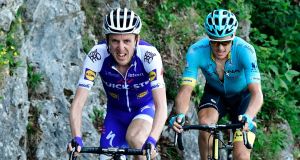 Ireland’s Daniel Martin (left) and Denmark’s Jakob Fuglsang ride in a breakaway during the 115 km eighth and last stage of the 69th edition of the Criterium du Dauphine. Photograph: Getty Images 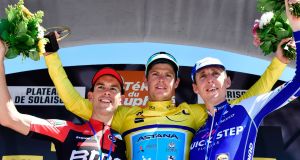 Dan Martin showed that his build-up to the Tour de France is bang on track with a highly impressive display on the final stage of the Criterium du Dauphine in France on Sunday. The Irishman was one of the strongest on the 115-kilometre mountainous race to the Plateau de Solaison and timed his final effort perfectly to gain time over all bar one of the other riders in the race.

He went clear with Jakob Fuglsang (Astana) seven kilometres from the top of the final climb and while the Dane was able to push on ahead to take the stage win, Martin reached the line just 12 seconds back. South African Louis Meintjes (UAE Team Emirates) was 15 seconds further back in third, while big guns such as Richie Porte (BMC Racing Team), triple Tour de France winner Chris Froome (Team Sky) and 2007/2009 Tour champion Alberto Contador (Trek-Segafredo) lost between one minute 15 seconds and four minutes ten seconds.

“The pace today was high right from the beginning, so my main goal was to conserve the energy I had until the final climb, where I wanted to make a big attack,” said Martin. “I gave it my all out there and at the end of the day I’m happy with my result, but also with how I raced here this week, because I had a different approach than in the past.

“All I wanted this week was to race relaxed and not be worried about the result or the time lost in the time trial.”

Fuglsang’s move saw him leapfrog race leader Porte and win the race overall, with the Australian finishing second, ten seconds back. Martin improved five places to a final finishing position of third overall, a feat all the more commendable as he had been back in 18th place due to time lost in the stage four time trial.

He was one minute 32 seconds behind Fuglsang but, more importantly, beat Froome by a second to seal his second consecutive podium place in the event. Martin was also third overall in last year’s Criterium du Dauphine and went on to finish ninth overall in the Tour.

This time around, he made clear that he was building up more slowly in order to be stronger in the final week of the Tour de France, and so his third overall suggests he is at a better general level than 12 months ago.

“I had no pressure and I really enjoyed this race, even today’s stage, which was one of the toughest in my life, but at the same time one of the most fun,” he said. “Now I will do a recon of some of the Tour de France stages, fine-tune my condition for the race and wait with confidence for July to come.”