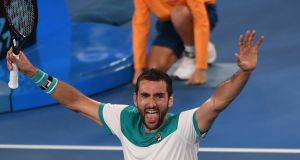 Kyle Edmund discovered to his cost on Thursday night in Melbourne that Marin Cilic is no longer the mentally fragile player who collapsed against Andy Murray in the semi-final here eight years ago, although he leaves here a dignified if bruised young loser.

Cilic, more robust physically and mentally than when Murray outlasted him in four sets on the same court in 2010, ground down his limping adversary over two hours and 18 minutes to win 6-2, 7-6 (4), 6-2 to advance to the final after nine attempts.

Cilic said courtside that he spotted Edmund struggling towards the end. “I noticed in the third game of the third set when I broke him, he let a couple of balls go,” he said. “I was seeing he was a bit restricted and I tried to move him around. He’s playing great tennis. But he played a couple of tough five-setters and a four-setter here, and definitely it left some scars on his body. But he has a bright future and we will see him around a lot.”

Edmund, in his first slam semi-final and Britain’s only representative in the men’s draw, can be proud of his effort but, hampered by a leg strain from early in the third set, he could not answer the Croatian’s clinical firepower.

Cilic stayed away from Edmund’s forehand in a nervous opening and had to save twice – to the backhand. It would be an hour and a half before Edmund got another look on the Cilic serve.

A career-first foot-fault of a rare kind (shown to be marginal on replay) – when he let his rear right shoe rock just beyond the centre line in the second game of the match – interrupted Edmund’s rhythm, but he served out.

They had spent an eerily similar time on court getting to the semi-finals – 14 hours and 45 minutes for Cilic, three minutes longer for Edmund – so fatigue was unlikely to be a factor. There was nothing in Edmund’s demeanour that hinted at a collapse, while Cilic, six years older, occasionally stretched in the shot but was plainly fired up.

He was properly focused to break for 4-2 , as Edmund’s attention slipped: his first crisis. Cilic held through deuce for 5-2 after half an hour, and applied educated pressure on Edmund’s nervous serve to take the set with a smooth, short forehand after 35 minutes. Edmund saved through deuce for two games-all just short of the hour, but he was hanging on.

On the hour came an Edmund blow-up nobody could have anticipated. Complaining that the call from the line judge of “out” on Cilic’s serve arrived mid-shot, he stormed to the umpire’s chair and pleaded: “Get the referee: I’m not having it.” Nothing came of it. His intensity level red-lined with a couple of fiercely thrashed forehands – but Cilic held.

The semi-final suddenly became an exercise in anger management. Edmund struck a fifth ace to hold to love. So did Cilic.

Serving to stay in the set, Edmund double faulted at 170kph for 30-all.

Rattled or searching for a reason to wind himself up, he complained about the overhead image flickering into his eye-line on serve – and held. He forced the tie-break, saving one of three set points before Cilic drove down the line to go two sets up after an hour and 39 minutes.

Only Roger Federer, in the 2016 Wimbledon quarters, has come from two sets down to beat Cilic. There is a history of minor flakiness in the Cilic CV – but invariably against the very best.

His confidence grew in the third set as he thrashed his ground strokes deep and wide, and Edmund looked spent dumping a backhand to hand him the break in the third game, after an hour and 49 minutes.

He’d moved stiffly since Cilic caught him flat-footed early in the second set and he was becoming an easy target. After forcing a couple of deuce points in the fourth game, Edmund was beginning to resemble a sitting duck.

Unable to force his way forward through a hail of big forehands, he could do little more than stand and deliver from the back. It wasn’t nearly enough.

He did not give up. He chased every gettable ball – but those chances dwindled. Cilic came through the quarters when Rafael Nadal’s hip gave up on him, but he was not distracted from his task. Nor was he here, playing each ball on merit, although he butchered a break point with a sloppy backhand as Edmund clung on for 2-3. He extended the fight as long as he could, but his tired final backhand told the story.

Cilic is the first player since Stan Wawrinka in 2014 from outside the notional Big Four to reach the final. Before that, it was Jo-Wilfried Tsonga in 2005. Despite leaving just short of the ultimate test, Edmund’s improvement is by far the most dramatic of the new contenders. When he arrived, although visibly on the rise, he had never beaten a top 10 player in 13 attempts; in the space of a week, he has beaten Kevin Anderson, just outside the top 10, Grigor Dimitrov (3), and fallen short against the No 6 Cilic.

More significantly, perhaps, he has shaken his five-set hoodoo, winning two here over the full distance against top players after enduring a three-match losing streak against top-tenners in the previous two-and-a-half years. It was not the worst defeat of his career – although he will take some convincing of that view.