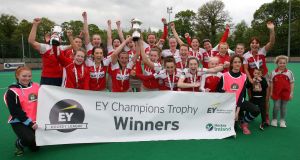 Loreto’s Hockey League-winning aspirations will face the toughest of examinations over the weekend when the leaders take on the two teams immediately below them, Pegasus their opponents in Belfast on Saturday before they host Old Alexandra at Beaufort the following day.

It’s been musical chairs at the top of the table in recent weeks with all three sides taking their turn at the summit, but the postponement last weekend of Pegasus and Alexandra’s games allowed Loreto nudge ahead, their advantage now three points having played one game more.

Loreto are on a 12-game unbeaten run, their only defeat of the campaign coming in their opening fixture against Pembroke Wanderers back in November, but three draws in their last four outings have proved costly. Still, that’s better form than Pegasus have produced of late, although injuries and player unavailability hardly helped in a run that has seen them drop eight points from the five games they’ve played since the resumption of the campaign after the winter break.

Alexandra’s post-winter break record was perfect until UCD overturned a two-goal deficit to beat them in their last outing, so they’ll be especially eager to return to winning ways when they take on Catholic Institute. But the Limerick side’s recent visits to Dublin - this will be their fifth in the last six weeks - have proved productive, the last three of those games producing a win and two draws, including last week’s 1-1 tie with Loreto.

Pegasus and fourth-placed UCD meet on Sunday, in what will be a dress rehearsal for March 29’s Irish Senior Cup final, while Loreto will be aiming for a repeat of November’s 3-1 victory when they take on Alexandra.

With a home game against Cork Harlequins followed by an away trip to bottom club Belfast Harlequins, fifth-placed Pembroke would boost their Champions Trophy-qualifying hopes if they could take maximum points. Belfast, though, should have a spring in their step after picking up their first win of the campaign last weekend.