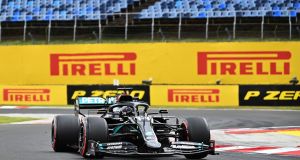 Lewis Hamilton during qualifying for the F1 Grand Prix of Hungary in Budapest. Photograph: Getty Images

Lewis Hamilton set a new track record as he roared to his 90th Formula One career pole for Sunday’s Hungarian Grand Prix.

The six-time world champion pulled out another of his magical laps to see off Valtteri Bottas by 0.107 seconds as the all-conquering Mercedes team locked out the front row for the third time in as many grands prix.

The Mercedes cars are in a league of their own this season, with Racing Point — designed on last year’s world championship-winning machine — the best of the rest.

But Hamilton was almost a full second ahead of third-placed Stroll with Mercedes on course to claim a staggering seventh consecutive drivers’ and team championships.

Hamilton enjoys a remarkable record at the twisty Hungaroring venue, and will go in search of his eighth win there on Sunday.

“I have to pinch myself,” said Hamilton. “It doesn’t register. It is quite humbling because I work with an incredible group of people.

“Valtteri doesn’t make it easy for me so it requires absolute perfection when it comes to doing the laps and qualifying is one of the things I enjoy the most.

“The lap was nicely hooked up today. Nothing is a given here. I have got to deliver on the start tomorrow.”