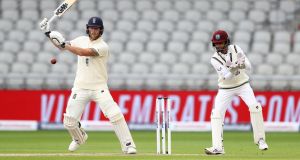 Ben Stokes displayed his leadership qualities just as vividly here as at the Ageas Bowl, when he was captain. After the first Test Stokes noted in a suitably measured way that England had forfeited a strong position, their batsmen had not been ruthless enough when on the brink of taking charge of the match. Here, with more stalwart assistance from Dom Sibley, Stokes ensured that England did not make the same mistake again.

He delivered an innings of great self-denial as well as skill, during which he only allowed himself liberties after he had been at the crease for at least four hours. His 176, which spanned 111 overs, was an eloquent, wordless message to the others. They keep telling us that Stokes is a leader in this team whether he has the stripes or not. It sounds like a cliche; but it is true. Now we must add “dependable” to the more colourful adjectives we use to describe him.

His partnership of 260 with the adhesive Sibley surely means that England cannot lose this Test after declaring on 469 for nine. For West Indies, who refused to wilt despite injuries and hours without a wicket, there remains a major incentive. They only have to draw here to retain the Wisden Trophy. Jason Holder’s bowlers won them the first match; now the onus is on their batsmen to save this one after 162 overs in the field. They had 55 minutes to bat on Friday evening against a fresh attack, which was led by a bristling Stuart Broad in his new white headband. He wanted a review in his first over but the wise men behind the stumps wisely denied him that opportunity. When Joe Root did review it was after Sam Curran had rapped the pads of John Campbell and it was a good decision: West Indies closed on 32 for one.

Holder began the day with his New Testament pairing of Gabriel and Joseph but there were no miracles forthcoming. Indeed the oddity of the England innings was that the ball kept moving throughout, in the air for the quicker bowlers and off the pitch for the spinner. Yet Sibley and Stokes could not be separated for 94 overs.

There was so much swing available with the old ball that West Indies chose not to change it for a new one until it had been used for 93 overs. Both batsmen played and missed several times. Kemar Roach, entrusted with the new ball, was as unlucky as any of the bowlers as he pursued his first wicket since dismissing Virat Kohli first ball in Kingston last September, four Tests ago. He had two lbw appeals declined on the basis of an umpire’s call and somehow kept smiling.

Holder stuck with his pacemen all morning until the over before lunch when Chase was called up and not much happened in that session. Sibley, 86 not out overnight, reached his century just before the break with one of his crisper strokes, an on-drive for three. It was an innings of great merit and eagerly applauded in the Sky commentary box. They could hardly rail against the lack of acceleration as a panel emerged of slow England centuries since 1990. Sibley, who took 312 deliveries to reach three figures, was the fifth slowest on the list. Above him were Nasser Hussain (once in Durban) and Mike Atherton (three times in Sydney, Karachi and at the Oval).

Stokes took lunch on 99 before reverse sweeping against Chase to reach his 10th Test century – and his slowest. Now he began to accelerate but in a calculated way, mindful of England’s profligacy in the first Test. There was a glorious six off Alzarri Joseph over mid-on and soon afterwards the young paceman had to leave the field with what proved to be a problem with his triceps. With Gabriel less than 100% fit but soldiering on, Holder was fast running out of ammunition.

By contrast Sibley struggled to accelerate, especially against Chase, who was making the ball turn a surprising amount while bowling to a packed onside field. Eventually he heaved at Chase and a mis-hit was caught on the midwicket boundary by Roach. Soon after Ollie Pope endured the fate of so many batsmen who have had to wait for almost six hours as the next man in. An off-break from Chase was trapped between his pads and Pope was trapped lbw.

On either side of tea Stokes and Jos Buttler added 43 together before Roach, after 521 barren deliveries, found himself on a hat-trick again – just as he had been after dismissing Kohli. Stokes became his 194th Test victim and, I presume, his first one via a batsman playing a reverse sweep, which was edged to the keeper.

Out came Chris Woakes, who pushed hard at his first ball, a decent away swinger, and Shai Hope held a neat catch at third slip. Roach’s smile was no longer forced and England’s acceleration came to an end for a while. Buttler’s 40 and an impish unbeaten 31 from Dom Bess saw the total past 450; Chase finished with five for 172, figures that are seldom a source of unfettered celebration. – Guardian