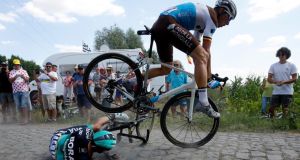 Two years after suffering a career-threatening accident, former Paris-Roubaix champion John Degenkolb claimed his maiden Tour de France win on his favourite terrain when he tamed the cobbles and powered to victory on Sunday’s ninth stage.

The German, who won the Queen of the Classics in 2015, was one of three riders to jump away from the main pack 19km from the line and he was the fastest in the final sprint, beating overall race leader Greg van Avermaet of Belgium.

Another Belgian, Yves Lampaert, took third place after a 156.5-km ride from Arras featuring 21.7km of bone-shaking cobbled sectors, some of them featuring on the Paris-Roubaix route.

“It is very emotional, I went through such a difficult period so today is pure happiness,” said Degenkolb, who suffered several fractures and a serious finger injury after he and some team-mates were hit by a car during a training ride in January 2016.

“But my team and my family supported me. In Germany they say those who have had a brush with death live longer.

“I’ve had bad luck, but I always had the will to come back to my best.”

Frenchman Warren Barguil, a former team-mate of Degenkolb’s who was also in the 2016 accident in Spain, said: “Everybody was saying he was finished, I’m so happy for him.”

Among the contenders for the overall win, last year’s runner-up Rigoberto Uran lost one minute and 28 seconds on his main rivals after crashing about 30km from the finish. Australian Richie Porte pulled out after an early crash.

Monday’s first rest day, after an 800-km transfer by plane to the Alps, will be much appreciated by the riders, who crossed the line in Roubaix, their faces covered by a mixture of dust and sweat after three and a half hours in scorching heat.

The Tour is, however, over for Porte, who was taken to hospital with a suspected shoulder injury after hitting the asphalt 10 kilometres into the stage – the second time in a row that the BMC rider crashed out of the race.

Defending champion Chris Froome fell off his bike as he tried to avoid a rider who crashed before him, but never lost his composure and finished with all the main title contenders.

Froome attacked as soon as Bardet punctured for the last time just at the end of the last cobbled sector, but the Frenchman, who at some points was lagging 40 seconds behind, benefited from huge pulls by his team-mates Tony Gallopin and Oliver Naesen.

Ireland’s Dan Martin came home in the group 27 seconds after stage winner Degenkolb and he moves up seven places to 24th in the overall classification.