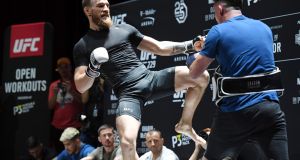 Conor McGregor believes he has spotted flaws in Khabib Nurmagomedov’s fighting style and intends to “take his head off” in their showdown for the UFC lightweight title.

Their bout at the T-Mobile Arena in Las Vegas this weekend has been billed as the biggest in the UFC’s history and McGregor is looking to make a statement against the person who succeeded him as 155lb champion.

At the workouts open to the public at the Park Theater, McGregor thrilled those in attendance as he introduced his young son before settling into his routine, predictably focusing on his striking technique.

Afterwards he told the cheering audience: “Saturday night: You’re in for a show, trust me on that. I’m going to take his head off. Trust me.

“(It will be a) devastating KO. (Nurmagomedov is) too easy to hit, too flat-footed, too predictable, I’m going to knock him clean out.”

McGregor is returning to the UFC after a near two-year absence against Nurmagomedov, who will make the first defence of the title he won by beating late replacement Al Iaquinta in April.

The Irishman was relieved of the crown because of his hiatus from the octagon, having made a brief foray into boxing to challenge Floyd Mayweather in a highly lucrative contest in August last year.

Now he is back in mixed martial arts for a fight that is seen as a puncher versus a grappler, but McGregor is unfazed by his Russian opponent’s gameplan.

He added: “I don’t give a f*** about anything. Any wrestling, any technique, any anything. I’m coming for that man’s head from the f****** bell.

Nurmagomedov had earlier been given a hostile reception from a largely pro-McGregor crowd and appeared to cut his session short in order to remonstrate with his foe’s supporters.

The 30-year-old, who put a particular emphasis on his takedowns and wrestling during his programme on Wednesday afternoon, also questioned McGregor’s pride in his Irish heritage.

McGregor mentioned in last month’s press conference about how his ancestors fought the English empire and that his family name was banned for a century by King James.

Nurmagomedov said: “These guys talk about (how) they fight English people but his grandfather worked with the English navy. Now you support (his grandson)? I’m going to change this on Saturday night.

“Are you guys right now with England, you guys change your language. Give me answer someone if you can. It’s very interesting.”

Conor McGregor is a fluent Irish speaker and studied in Coláiste de hÍde, a Gaelscoil in Tallaght.