Ireland stars return to action as hockey season gets under way 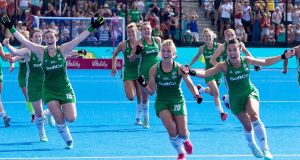 They’re most probably still perched on cloud nine after the summer they experienced, but it’s back down to earth this weekend for a clutch of Ireland’s World Cup squad as the new EY Hockey League season gets under way.

While six of the panel will be playing abroad in the months ahead, as well as reserve goalkeeper Emma Buckley who has left Cork Harlequins for Racing Club de Bruxelles, two-thirds of Graham Shaw’s panel will still be based at home.

Both Chloe Watkins, who has returned to Monkstown after her Dutch adventure with Bloemendaal, and Róisín Upton, who has re-joined Catholic Institute from Harlequins, will be playing in the inaugural Hockey League 2 where 10 teams, divided in to two pools of five, will battle it out for promotion to the top tier.

Trinity, Corinthian, Queen’s, UCC and Greenfields make up pool A, while pool B is comprised of Institute, Monkstown, Lurgan, Dungannon and NUI Galway. The winners of the playoff between the two pool winners at the end of the campaign will be promoted to the Hockey League, with the losers given a second chance against the team that finishes second from bottom of that top tier.

UCD will open the defence of their Hockey League title away to Pegasus on Saturday without their three World Cup stars, although while Ireland captain Katie Mullan and Deirdre Duke will be playing their hockey in Germany this season, Lena Tice is expected to return to the fold before the end of the year. Tice was part of the Harbour Hawks side that won the New Zealand national title for the first time in eight years last weekend.

Loreto, last season’s surprise Champions Trophy winners, have added Irish under-21 goalkeeper Liz Murphy to their ranks after she joined from Monkstown. They begin their campaign away to Cork Harlequins who they beat in May’s final.

Newly promoted Old Alexandra square up against Railway Union at Milltown in the day’s only all-Dublin clash, while Belfast Harlequins host Pembroke Wanderers at Deramore Park. Harlequins have Ireland’s Zoe Wilson and Liz Colvin on board again this season, but Pembroke could be one to watch having strengthened during the summer, among their new recruits Lynne Froeschle from German champions Club an der Alster and Sinéad Loughran from Monkstown.

Muckross make their return to the top flight of Irish hockey on Sunday when they take on Ards at home, the Ulster side having to make do this season without the prolific Chloe Brown who has joined East Grinstead in the English league.