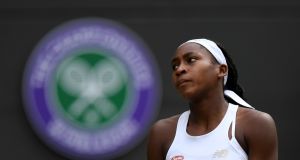 Cori Gauff was beaten in straight sets by Simona Halep to end her dream run at Wimbledon. Photograph: Tony O’Brien/Reuters

In his column this morning Kevin McStay looks at the state of play ahead of the Super 8s, which get underway on Saturday following the final round of qualifiers last weekend. And after seeing off rivals Galway in impressive fashion in Limerick - running out 2-13 to 1-13 winners - he believes things are opening up nicely for James Horan’s Mayo. He writes: “The other big winner at the weekend was my own county Mayo, because they’re down for a Round Three match against Donegal in MacHale Park having played Meath in Croke Park a fortnight earlier. . .Mayo’s resurgence spells difficulty for Kerry too. If James Horan’s team get something down in Killarney they will leave Kerry going to Croke Park to face Donegal with everything on the line.” Dublin’s pursuit of five-in-a-row continues with an opening Group 2 clash against Cork in Croke Park on Saturday - and McStay asks if it is fair Jim Gavin’s side are allowed to use HQ as their home venue during the round-robin stages: “Motion 39 came down to fairness or finance. It ruled out Croke Park as a home venue for any team in the Championship and, of course, that was directed at Dublin. No one has an issue with it as a neutral venue for the traditional games between provincial champions and for the later stages of the All-Ireland.”

Coco Gauff’s dream run to the last-16 of Wimbledon came to an end yesterday, as she was beaten in straight sets, 6-3 6-3, by Simona Halep. The 15-year-old seemed off-colour against Romania’s Halep, with the world number seven delivering a clinical performance to bring an end to the story of the tournament - for now. Prior to Gauff’s defeat on Court One, Serena Williams needed just 64 minutes to blow away Carla Suárez Navarro in straight sets, 6-2 6-2. Williams will face compatriot Alison Riske on Centre Court in the quarter-finals today, after Riske beat world number one Ashleigh Barty in straight sets. There were no upsets in the men’s draw however, with Roger Federer, Rafael Nadal and Novak Djokovic all cruising to into the last eight after straight set victories.

12 Doctors ‘shooting themselves in foot’ by campaigning against FG, Varadkar texted Ó Tuathail

13 Is Ireland ready for the Covid-19 vaccine?

14 Brexit: EU and UK negotiators to resume talks in ‘last throw of the dice’

15 Viggo Mortensen: It ‘felt awkward’ replacing Stuart Townsend in Lord of the Rings

16 Fintan O’Toole: All the main actors in the Troubles tell partial, distorted and deceitful story

23 The history wars: A new battleground in Irish politics

24 David McWilliams: Start building and don’t stop until we have all-island transport

27 The word of the year is defined as ‘watching Normal People in your pyjamas’. What is it?

28 Jennifer O’Connell: Is it time woke culture was cancelled?

30 Helen McEntee announces she is pregnant

34 Val McDermid: ‘There will be a united Ireland within five years’

36 Covid-19: Is Christmas really the problem?

37 Jackie Tyrrell: Every corner-back is an island now