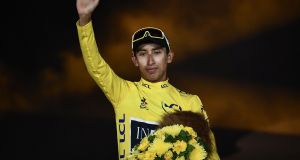 Dan Martin took a solid 18th overall in the Tour de France on Sunday, finishing in the main bunch on the final stage in Paris.

Martin ended the three-week race 44 minutes 30 seconds behind overall winner Egan Bernal of Team Ineos. He suggested that he will soon make clear the reason why he didn’t perform as well as he expected in the event.

Compatriot Nicolas Roche’s plan to help Sunweb team-mate Michael Matthews win the final stage of the Tour was derailed inside the final 11km , with the Australian rider suffering problems with his rear derailleur. Roche helped Matthews return to the peloton but it was too late for him to take part in the finishing sprint.

Martin finished 109th on the stage, with Roche 137th. Roche ended the race 44th overall. Both riders are expected to line out in the Clásica de San Sebastián next Saturday.

Bernal is the first Colombian to win the Tour de France, sealing victory as darkness fell across Paris on Sunday.

As a spectacular 21st stage of the 2019 Tour took in the Palais du Louvre, the Place de la Concorde and the Champs-Élysées, Caleb Ewan proved the fastest of a fatigued peloton in the traditional sprint finish to the race. It was Ewan’s third stage victory of this year’s race, while Peter Sagan celebrated winning the green jersey of points classification for a record seventh time.

However, it was Bernal’s remarkable triumph that sent shockwaves through the sport. The 22-year-old was mobbed by team-mates and delirious Colombian fans who had flooded the city of lights to celebrate a long-awaited success in the world’s most famous bicycle race.

“I don’t think he knows what’s hit him yet,” the Team Ineos principal, Dave Brailsford, said. “I don’t think he has any idea what’s just happened to him. In sport, we lose way more than we win. As for him being the first ever Colombian, having been to Colombia and seen millions of people just when Egan won the Tour of Colombia, the place went bananas.”

Brailsford added: “His status in cycling has changed now. He came into this race and it was ‘Geraint and Egan’, whereas now I think people will perceive him and ride against him in a different light. Geraint Thomas drew a lot of attention and that allowed Egan to go under the radar a little bit.”

As Brailsford and his staff celebrated a 10th Grand Tour win since 2012, Romain Bardet took the King of the Mountains classification, while the long-term race leader and French favourite Julian Alaphilippe, who spent 14 days in the yellow jersey and won two stages, was awarded the “super combativity” prize for most aggressive rider.

At 22, and as the third-youngest winner in the history of the Tour, Bernal also claimed the best young rider classification, in addition to the yellow jersey. But despite his prowess in the mountain stages, Bernal also finished the Tour without a stage win, as did team-mate Chris Froome in 2017.

Bernal is widely tipped to go on to further Grand Tour success after this breakthrough win for South American cycling, but Brailsford is wary of the impact stardom may have on the young Colombian.

“The big thing is that the status of his life will change and at a relatively young age,” he said. “He’s got all his 20s to adapt to that. I think it will go one way or another for him. Some carry on and get used to the world they live in and everything they have to deal with and other people don’t.

“A lot of the guys who became successful for us were older, late 20s, and the life-change came after they got used to life at a certain level. When it happens younger you adapt quicker, so you grow up in a different world from some of the other guys. His agent I know very well and is close to him. He’s got a good network around him and his coach is really important now. So we need to sit down and have a plan.”