Kellie Harrington one fight away from gold in Bulgaria 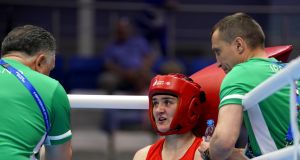 Kellie Harrington will box for gold in Bulgaria on Saturday. Photograph: Soenar Chamid/Inpho

Kellie Harrington has the chance to mark her return to the ring with a gold medal after she progressed to the lightweight final of the Strandja multi-nations in Sofia, Bulgaria.

Harrington secured her place in Saturday’s final with an assured victory over home fighter Denica Eliseeva on Friday, guaranteeing at least a silver medal in the process.

The Dubliner won all three rounds in her semi-final bout and now faces Mira Potkonen - the Finnish fighter who dumped Katie Taylor out of the 2016 Rio Olympics - for gold.

However Roscommon’s Aoife O’Rourke had to settle for a bronze medal after she was beaten in her middleweight semi-final by the USA’s Oshae Jones in a unanimous decision.