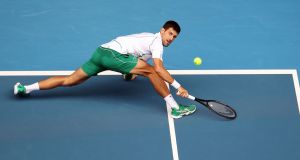 Defending champion Novak Djokovic despatched Japanese wildcard Tatsuma Ito 6-1 6-4 6-2 to reach the third round of the Australian Open on Wednesday.

The world number two Serb, who struggled through a four-set grind against unseeded German Jan-Lennard Struff in his opener, was back to his imperious best as he fired down 16 aces and racked up 31 winners at a gusty Rod Laver Arena.

Chasing a record-extending eighth title at Melbourne Park, Djokovic finished off with a slew of thumping serves, sealing the match when a scrambling Ito thudded a shot into the net.

Djokovic will meet another Japanese player in Yoshihito Nishioka, who knocked out British 30th seed Dan Evans in straight sets, for a place in the fourth round.