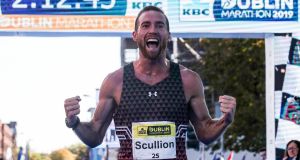 The operation transformation is now complete, Stephen Scullion going by his own admission from couch drunk to Tokyo Olympian in the space of just three years.

Defying the windy conditions, Scullion held his pace and his focus to run 2:11:52 and more crucially nail fifth place in a properly elite field in Sunday’s Houston Marathon: his first sub-2:12, it fell just short of the 2:11:30 qualifying time for Tokyo, but does still secure Scullion his Olympic ticket given Houston was this year awarded Gold Label status by World Athletics.

In addition to qualifying times (and potentially qualifying rankings), a top-five finish in a Gold Label marathon also earns automatic qualification (along with a top-10 in the World Marathon Majors and 2019 World Championships).

Scullion thus becomes Ireland’s third marathon qualifier for Tokyo, along with Paul Pollock and Fionnuala McCormack – both races in fact taking place 800km north of Tokyo next August, after the International Olympic Committee (IOC) deemed the conditions there to be less gruelling come the height of the Japanese summer.

Either way it completes the journey and transformation for the 31-year-old from Belfast: just three years ago Scullion was still smoking, well over his natural running weight, and admittedly getting drunk almost every weekend – either on the couch or else ending up there.

“This hurt me a lot,” Scullion said afterwards, referring to the 18mph winds which cut through most of the race, it also being his third marathon in 15 weeks. “It made me angry, that I needed to run fast, but I had to relax and not make excuses, focus on every mile and run like a f***ing animal would, ignoring the elements and race competitively until the job’s done.”

It hasn’t always been smooth: this time last year, Scullion finished 10th in Houston, running a best of 2:14:34, the then fastest marathon by any Irish man since 2011, despite taking a wrong turn around 20km.

He raced his next marathon in the properly cruel conditions of Doha at the World Championships in October, finishing down the field in 43rd place, running 2:21:31. On the verge of quitting, his coach Stephan Haas helped convince him to run again in the Dublin Marathon, just three weeks later, where Scullion finished a superb second best overall in 2:12:01, the then fastest time by any Irish man in 17 years, and only beaten on the day by Morocco’s Othmane El Gourmi, recently returned from a doping ban.

Last month, Pollock came out in the Valencia Marathon and also ran a new personal best of 2:10:25, well inside the automatic Tokyo time, also moving the fellow Belfast runner to number two on the Irish all-time list behind John Treacy’s 2:09.15 set 32 years ago in Boston.

Victory in Houston went to Woldaregay Kelkile Gezahegn from Ethiopia in 2:08:36. For Scullion the finishing position counted for far more than time, and hard-earned too, as he closed from seventh to fifth inside the last 10km, having passed halfway in 65:49. “I don’t mean to brag,” he added, “but fifth in a PB 2.11.52 and the wind was beating the shit out of me. Top five Gold Label is Olympics. We did that . . .”

Scullion has often said he’d need both hands to count the number of times he’d quit the sport in recent years, only to discover some irresistible urge to start back, having held so much promise since his champion schoolboy days at Wellington College Belfast. Since his proper comeback in 2018 he’s based himself in Flagstaff, Arizona, hammering out the miles at 7,000-feet altitude rather than getting hammered drunk.

“I feel like I’ve conquered the demons that used to hold me back, and I’ve got to keep going now until I can’t stretch any more improvement,” he told The Irish Times in a recent interview: “And part of that was getting over myself, the spoiled kid who didn’t like to lose, but I think I’ve found a balance, to do what it takes to succeed, and maybe inspire a junior athlete somewhere down the road to not f*** it up for six or eight years.”

“For years, the task just seemed too difficult, I could never see past the weekend. Monday to Friday I was fine, but come Friday, with all my mates going out partying, I could never resist, and you’ll never make it if that’s where you’re at. If you’re going down the path of playing some rugby on a Saturday, then getting pissed for the next 24 hours, you’re not much of an inspiration to anyone, really.”

1 Cheltenham faces criticism after racegoers suffer Covid-19 symptoms
2 Health official says decision to hold Liverpool-Atlético game was wrong
3 Ireland’s underage rugby stars miss out on chances to shine at Easter
4 America at Large: On Long Island, longing for a return to our field of dreams
5 Karen Robinson Walton: I am looking at him. I say ‘Benjamin, what have we done?’
Real news has value SUBSCRIBE