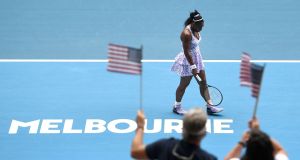 Serena Williams lost out to Qiang Wang at the third round of the Women’s Singles match on day five of the Australian Open. Photo: Lukas Coch/EPA

Serena Williams staggered out of the Australian Open on day five, losing in three sets to the world No 29 Wang Qiang, a brave but flawed performance that exposed the veteran American’s gathering frailties.

It was the biggest shock of the tournament and the biggest upset of Wang’s career. She took a single game off Williams in New York six months ago.

“I told my team I could always do it today,” she said courtside. “It was really good work. I am very happy. After the second set, I was a little confused. I had to be calm. My mind always tells me I have to be calm and trust myself.”

China’s best player, a 29-year-old late bloomer, played the match of her life against the seven-time champion to win 6-4, 6-7 (2), 7-5 in two hours and 41 minutes on the tournament’s biggest stage, and looked to enjoy every minute, even the bad ones.

Williams, though, suffered in every crest and slump, unable to disguise what staying in the Open meant to her – a chance to equal Margaret Court’s all-time record of 24 majors.

That moment is gone. Nor will there be an emotional fourth-round meeting for Williams and her best friend, Caroline Wozniacki, no hugs at the net, win or lose, to bid the Dane farewell from tennis. Only 29 but suffering from rheumatoid arthritis, this was Wozniacki’s last tournament. As Williams and Wang embarked on the deciding set, Wozniacki was falling in three sets to Ons Jabeur, the Tunisian who put Johanna Konta out in the first round.

At the start of the week, Williams beat the Russian teenager Anastasia Potapova in less than an hour to join Roger Federer as the only player in the Open era to win 350 matches in grand slam tournaments. But the impression on Friday was that history is beginning to weigh heavily on her.

Wang broke at the end of the first set, forcing repeated errors from the American, who looked increasingly weary, her movement sluggish and her ground strokes lacking penetration. Wang struck again in the fifth game of the second, as Williams continued to struggle after just over an hour.

Two key moments arrived in the sixth game, when Wang clipped the line with a running forehand and then Williams hit a regulation backhand long from mid-court to trail 2-4. Scattered calls of “Come on, Serena” floated around a stunned Rod Laver Arena, fans waiting for a comeback that looked increasingly unlikely.

Serving at 2-4, Williams handed Wang a chance for the double-break but held through deuce, when her opponent struck long from the baseline.

The errors continued to flow from Williams’s racket as she failed to crack the Wang defence, in long or short rallies. When Wang defied a late onslaught to hold for 5-2, fans held their breath as Williams walked slowly to the service line. She held to 15, forcing Wang to serve it out.

Williams continued to swing hard, winning the first two points. Wang clawed one back for 15-30 and netted a backhand to surrender two break points. Williams raised her arms in triumph when she finished a 24-shot rally with a crosscourt forehand winner.

Her relief was as palpable as the tension in every corner of the building – and the tournament. This sort of news spreads quickly, no matter how many matches are in contention at the same time.

Wang was as cool under pressure, though, as was Naomi Osaka when she beat Williams to win the 2018 US Open. She got two more break points, butchering the first and helpless to reach Williams’s wide ace for deuce. Then held again. Just.

They went to the tie-break, where Williams invariably prevails in big moments. She has lost only two at the Australian Open. She led 4-2 at the changeover, thanks to a bad mistake by Wang, and had the ball in her hand at 5-2 up. Wang pushed a forehand just wide to hand Williams four set points, and a big serve forced a third set.

Williams, who was behind in the serving cycle, saved break point for 4-4, then held with an ace to stay in the championships at 5-5. In the 12th game, Wang fashioned two match points on the Williams serve – and each time her racket twitched. She got another. This time, Williams blinked, her backhand billowing the net, and the job was done.

Seven years ago, Wang – who has played most of her tennis on the Asian circuit until the past couple of seasons – came through qualifying to beat Wozniacki in the first round of the Malaysian Open. She has won two WTA Tour titles and reached four finals. Her best finish at a slam was last year at Flushing Meadows, where she reached the quarter-finals after stopping the then world No 2, Ashleigh Barty, in the fourth round. It capped her breakout season at the highest level, after she had reached the third round in Melbourne, Roland Garros and Wimbledon.

Wang has beaten plenty of other good opponents, including Heather Watson’s conqueror here this week, Elise Mertens, and beat Watson in Tianjen in October. But trading on level terms, then outlasting, the player regarded as the greatest of all time will be a memory impossible to displace. – Guardian

1 Keeping Donegal on the road to success a costly business
2 Six Nations: Ireland v England all you need to know guide
3 England v Ireland preview: Ireland’s revival to face its sternest test
4 Matt Williams: Ireland will need to step up on Wales display to prevail at Twickers
5 Ireland Slam England at the Gardens to open up Grand ambitions
Real news has value SUBSCRIBE