Jostling with incredibility as curtain comes down on Doha 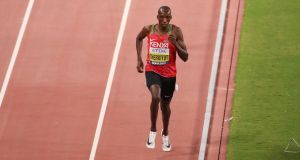 Timothy Cheruiyot of Kenya in the 1,500m final during day ten of the World Athletics Championships in Doha, Qatar. Photograph: Christian Petersen/Getty Images

Don’t look now. After 10 long days and even longer nights the curtain came down on the World Championships in Doha with credibility and impossibility still jostling for position.

Hot on the heels of Sifan Hassan producing the single most impressive women’s metric mile in championship history to complete an unprecedented distance running double, Timothy Cheruiyot came out to win the men’s equivalent in the fastest championship 1,500 metres since the days of Hicham El Guerrouj.

Cheruiyot was short of the 3:27.65 championship record El Guerrouj set 20 years ago, only his completely solo effort was no less impressive – the Kenyan winning in 3:29.26. Hitting the front from the gun, he passed 800m in 1:51.69 and was 20m clear at the bell, the rest left chasing for silver and bronze.

After falling over the line in fifth in the 5,000m, Ingebrigtsen was just .24 of a second shy of bronze – and so the long wait continues for a first European winner since Steve Cram took the inaugural title 36 years ago.

The men’s 10,000m final was similarly merciless, Joshua Cheptegei living up to his own billing to win gold for Uganda – his 26:48.36 also the second fastest in championship history – ahead of Yomif Kejelcha, the first time since 2009 the winner wasn’t named Mo Farah.

Also securing titles on the final night were Malaika Mihambo from Germany, her 7.30m the longest jump by any woman since 2002: Nia Ali was a more surprising winner of the 100m hurdles with a best of 12.34, with Anderson Peters winning a first gold medal for Grenada in the men’s javelin.

Both 4x400m relays went to (guess who) the Americans, who comfortably topped the medal table, winning 29 in all, 14 gold. In all 44 nations won a medal of some colour. Some of those also have a connection to the Nike Oregon Project, which hung over Hassan’s run on Saturday night like a cloak of impossibility.

In a properly astonishing race that also saw Ciara Mageean produce the run of her life to make the top 10, Hassan ran 3:51.95 to win her second gold medal – a new World Championship record, a new Dutch record, and the sixth fastest women’s 1,500m time in history.

Even more impressive than the 3:59 she ran for the final 1,500m of her 10,000m victory last Saturday, Hassan continues to go where no female distance runner has gone before – and taking others too. Behind her came a reel of lifetime bests and none more rewarding that Mageean’s, her 4:00.15 in 10th place just a lick away from the magical four-minute barrier, and also Sonia O’Sullivan’s Irish record of 3:58.85, set 25 years ago.

“Top 10 in the world, in a race like that, I’m over the moon, not bad for a wee girl from Portaferry,” said Mageean, improving her previous best of 4:01.21, clocked in Monaco back in July. “Once Hassan went on outside, I thought ‘right, we’re in for a treat now, get ready to run hard’. But I wasn’t going to lose my head, and I gave it everything over the last lap. I feel I’m going from strength to strength, and it’s been a stellar season, really.”

Mageean was the first Irish woman to make a world 1,500m final since O’Sullivan in Athens back in 1997, where she finished eighth, four years after winning silver. Indeed her 4:00.15 was faster than what China’s Liu Dong ran to win gold in 1993, and would have won her gold in seven of the last eight editions of these championships.

Move to the front

Hassan was always going to be the athlete to beat despite the absence of her coach Alberto Salazar, no longer allowed to associate with her after being given a four-year ban on Monday for anti-doping violations. Yet no one expected her to move to the front as early as she did, taking up the lead at 800m, passed in 2:05.9, before simply killing off her rivals with each passing stride.

Born and raised in Ethiopia before moving to the Netherlands as a teenager, Hassan becomes the first woman to win a 1,500m-10,000m double, no man going there either by the way.

Emotionally charged afterwards, Hassan boldly defended her improvements since moving to Salaazar’s gang. “I’ve worked so hard; people are talking such bullshit. This is proof that women can run amazing times with hard work.”

Not long after Hassan’s exhibition, Hellen Obiri from Kenya defended her 5,000m title with another championship best performance of 14:26.72, with another Nike Oregon Project athlete Konstanze Klosterhalfen winning a first bronze medal for Germany in the event, running 14:28.43.