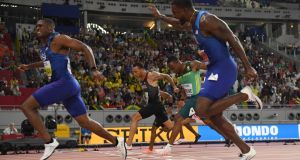 Christian Coleman of the United States wins gold ahead of compatriot Justin Gatlin and Andre De Grasse of Canada in the men’s 100 metres final at the World Athletics Championships at Khalifa International Stadium in Doha, Qatar. Photograph: Matthias Hangst/Getty Images

It wouldn’t be a proper race to decide the fastest man on earth without the need to suspend some credibility. Two years after Justin Gatlin beat Usain Bolt in the event that was billed as Good versus Evil; on Saturday night Christian Coleman prevailed against the backdrop of Good versus Mindless to win the World 100 metres title in Doha.

Coleman won silver in between Gatlin and Bolt in London two years ago, only this time lived up to his billing as the Next Big Thing to win his first title outright, the 23-year-old American clocking 9.76 seconds after a flat out 100m race without any indecision from the starting gun.

First out of the blocks, first into his stride, Coleman finished well clear of Gatlin, the now 37-year-old, who continues to defy the age barriers of global sprinting, taking silver in 9.89, with the Canadian Andre De Grasse running a personal best of 9.90 to win the bronze medal.

Two years ago in London, in that Good versus Evil, two-time doping offender Gatlin beat Bolt and Coleman to win the title, Bolt beaten into third place – his first ever loss in a major championship – and, more disbelieving it seemed, beaten by Gatlin, the then 35-year-old American.

That was an upset unprecedented not just on the global athletics stage but perhaps all of sport, in that no one – or at least so few – had seen it coming. When he dipped for the line Bolt was chest-level with Coleman, in the lane next to him, but nailing the win outside them both in lane seven was Gatlin, clocking 9.92.

Bolt had, remember, only won this title by .01 seconds ahead of Gatlin in 2015, and that was the fifth successive global silver medal for the American who won this world title in Helsinki back in 2005 – and kept that title despite failing a doping test a year later, which saw him banned from 2006 to 2010.

This time there was no doubt, Coleman, in lane four, running without any fuss or hesitation about the result. He came to Doha as the heavy favourite to win the gold medal. After London last year he broke the world record at 60 meters indoors and clocked the world’s fastest time at 100 meters in 2017, 2018, and 2019. His one loss in the last 15 months was to fellow American, Noah Lyles, concentrating on the 200m in Doha.

Only last month, news broke that Coleman was in danger of missing the World Championships for three whereabouts failures – essentially, missing three drug tests – in a 12-months span, which typically results in a two-year ban. However, Coleman, due to a technicality that allowed him to backdate his first failure before the 12-month window, was cleared

Coleman has denied any wrongdoing, adding that he doesn’t take supplements of any kind, legal or illegal. Another former champion in the field was Yohan Blake, the 2011 winner after Bolt infamously false-started, finished fifth in 9.97.

Commenting on the event for the BBC, former world 200m and 400m champion Michael Johnson said: “It completely disqualifies him, at this point, from ever being that face of the sport. This will follow him, as it should.

“I think this is an incredibly important issue around the sport because Christian Coleman was being touted to replace Usain Bolt as the big star of the sport.

“I don’t think that will happen now as a result of this. I think that fans of athletics don’t have any tolerance at this point for any sort of doping infraction.”

“ It’s simply disrespectful when fake fans speculate and talk about drugs in relation to the great athletes we have in this sport,” wrote Coleman on social media. “It does nothing but hold the sport back from the popularity I know it can reach in the future.”

The US Anti-Doping Agency (Usada) said Coleman had missed drugs tests on June 6th last year, and January 16th and April 26th this year – with three missed tests in a 12 months triggering an automatic one-year ban; However, the charge against the American was withdrawn after Usada received guidance from the World Anti-Doping Agency (Wada).

“Let’s be clear, Usada made a huge mistake by bringing a case against him when their own rules basically state that he had two, not three missed tests,” added Johnson.

“In fairness to Christian Coleman, there is a huge difference between positive tests – or even missing tests – and this situation. But if you are going to position yourself as the face of the sport and the superstar of the sport, you have a responsibility to always update your whereabouts and not make the mistake that he did in not updating those three times and then handling it the way that he did after it came to the public view.”