John Bracewell to stand down as Ireland coach in December 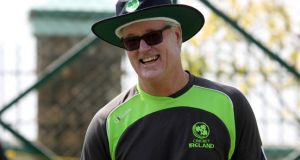 Head coach John Bracewell is to leave Cricket Ireland at the end of his contract in December. Photograph: Barry Chambers/Inpho

Ireland will enter the arena of Test cricket with a new head coach after Cricket Ireland announced on Tuesday that John Bracewell’s contract will not be renewed when it comes to an end in December.

The 59-year-old former New Zealand international took over from Phil Simmons after the 2015 World Cup in Australia and New Zealand, and despite his popularity with the players, results have been poor in what is a transitional period for the senior men’s team.

Bracewell was tasked with the role of leading Ireland in their bid to claim Test status through first winning the Intercontinental Cup and then coming through a Test playoff.

Ireland fell behind Afghanistan in the qualification table after a comprehensive defeat to their main challengers in India at the end of March, although the elevation of both countries to Test status at last month’s ICC annual conference in London made that result all but meaningless.

Bracewell admitted his decision to stand down was two-pronged.

“Having been down the full-on full member road before with New Zealand Cricket, it is not my desire to do so again,” said the former Gloucestershire coach.

“Whilst my wife and I have immersed ourselves into Ireland and Irish culture we feel it is now time to return home to New Zealand and our families. I have therefore agreed with Cricket Ireland to finish up at the conclusion of my contract.

“I have loved working with an honest group of players whose values and work ethic have been second to none. As challenging as the future may be, they will be the first to honour the Test cap and I am proud to have spent some time with them on that journey.”

Cricket Ireland performance director Richard Holdsworth has praised Bracewell’s ability to bring through players to the senior international squad in light of some high-profile retirements since the last World Cup.

“The last two years have been a difficult period of transition and rebuilding in which John has tried to nurture inexperienced talent against the best teams in the world,” said Holdsworth.

“He has immersed himself in the role, blooded and developed several new players, and has helped lay the foundations of a new coaching structure to build on.

“His last five months remain a very important period where I look forward to working with him to further invest in our key priority areas with new full member status now in place, and continue to lay down important foundations for our future.”

Cricket Ireland are intent on “a seamless handover towards the end of the year” and are expected to advertise for Bracewell’s successor in the coming weeks.

Current international Ed Joyce would be many Irish cricket fans’ preferred choice for the job considering he is winding down his playing career at 38, albeit with the intent of playing at least a coupe of Test matches.

The former Middlesex and Sussex batsman is keen to stay involved in the sport in a coaching capacity, although he said recently that he would prefer to take time before taking on a head coaching role so soon after the end of his playing career.

Former Leicestershire coach Ben Smith recently increased his consultancy coaching work with Cricket Ireland to 100 days per year and may be another interested in the job.