Roger Federer basking in golden glow of his Indian summer

At a press conference in London a croaky and hungover, Roger Federer could barely recall where he had been the night before, as he celebrated until dawn, following his eight Wimbledon. Video: REUTERS 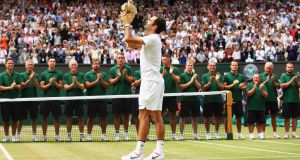 Ask Marin Cilic how lonely tennis can be on court, when injury has undermined every aspect of his game. Roger Federer has come out the other end of not knowing what was going to happen next, but not before he sought help for encouragement and self-belief after his career stuttered to a halt at the end of last year.

The 19-times Grand Slam winner, and holder of the record number of Wimbledon titles after his straight set win over Cilic, had questioned whether he was good enough to return at 35-years-old and become the best player in the world again.

Last year Federer struggled for months with the effects of a freak injury in Melbourne, when he twisted his knee while running a bath for one of his children. That required surgery in March, the first of his career.

He then fell heavily on his injured knee during his semi-final defeat to Milos Raonic at Wimbledon 2016. The moment he lost his footing stunned the crowd and sent colour writers into spasms as nobody had seen him fall on Centre Court before.

“I truly believed, you know. For me it was important that my team believed it, as well,” says Federer. “When you’re doubting yourself, they reassure you. If you’re feeling too good, they make sure you come back to planet earth and put you in your place.

“I need the team to carry me most of the time because that’s the few percent that makes a difference. I believed them. I had the same feeling. I think that’s why the break last year was necessary to reassess and get back to 100 per cent physically.”

After the 2016 Raonic defeat he walked away for six months, returning at the beginning of this year by winning the Australian Open in Melbourne after a hair raising comeback in the fifth set against Rafael Nadal.

He has lost just two matches in 2017 and held match points in both of those, collecting titles after Australian in Indian Wells, Miami, Halle and now Wimbledon.

“Basically the answer was always the same from them. They thought if you’re 100 per cent healthy and you’re well-prepared, you’re eager to play, then anything’s possible. But if those things, those components are not working...extremely difficult.”

His records extend to beyond the eight Wimbledon wins. He is now the oldest man to win Wimbledon since the Open era began in 1968 and in extending his record to 19 Grand Slam titles, has moved among current players to sit four ahead of Nadal on 15.

“I felt like I dreamed pretty big as a kid,” he says. “I believed that maybe things were possible that maybe others thought were never going to be achievable. That helped me.

“Then in the game, I guess, yes, I was blessed with a lot of talent, but I also had to work for it. Talent only gets you that far really.”

Greater attention to health and rest has transformed the durability of players and lengthened the time they can remain competitive. Federer, 36-years-old in a couple of weeks, sees no reason not to continue. But he will only look one year ahead.

Playing competitively at 40-years-old, oddly, doesn’t seem like such a ludicrous question when it’s asked of Roger Federer.

“At some stage you have to play a minimum of matches, otherwise you’re just not going to be successful anymore,” he says. “That’s going to be the interesting thing moving forward, how I’m going to be able to manage that.

“Playing Wimbledon and winning Wimbledon are two separate things. Don’t forget that. The problem with not playing, you take a chance on your health, too, in some ways, because matches actually are the real - what do you call it - the measuring stick.

Taking six months out could appear to be the new elixir for career extension. The Williams have also been judicious in what tournaments they played and in the past didn’t play any before Wimbledon.

World number one Andy Murray and Novak Djokovic are now seeking advice for respective hip and elbow injuries that have been with them for some time. But Federer cautions against a one size fits all approach.

“It doesn’t mean because I took a break that everybody should take that break. Some players just need to play,” he says. “They need to play every other day, otherwise they feel like they completely lose touch with the racquet and the ball. I can’t give any advice in this regard.

“But for me, a break really worked wonders now. I am still surprised it did as much as it did. I had to take some tough decisions along the way, like pulling out of the French (Open), pulling out of the clay court season. In hindsight it looks so simple. You just do that to win Wimbledon,” he adds almost reading the minds of people in the room.