Johanna Konta rises to the challenge on Centre Court 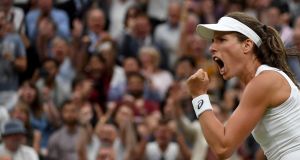 Johanna Konta of Britain celebrates winning the second set against Simona Halep of Romania during their quarter-final match at Wimbledon. Photograph: Facundo Arrizabalaga/EPA

The rain came in the late afternoon and for those on Centre Court a hunkered-in feel settled over the draw.

Occasionally there is one match under the roof that is not a final. Nothing at all is happening anywhere else, except for a few hundred determined fans sheltered under umbrellas and plastic on a wintry Henman Hill, determined to squeeze the last shilling of worth from their ground pass.

On Tuesday night it was a worthwhile shift. History and a first semi-final for a home British female player in 39 years (since Virginia Wade in 1978) made it a memorable evening. It was Johanna Konta who prevailed in three sets 6-7, 7-6, 6-4 with Wade in the Royal Box watching on.

Konta will now meet Venus Williams in the semi-final.

“Age is not a factor,” said Konta about the 37-year-old American. “She’s a tremendous champion. I feel privileged to share a court with her.”

Two more wins could deliver Konta an even bigger slice of history, the Wimbledon title that Wade won 40 years ago.

Evenings such as these have happened before and Andy Murray has occasionally turned fourth round or quarter-final matches into grand displays of national fervour, him alone commanding the attention of the nation, without distraction.

So Konta found herself the polestar in the thrum of the closed Centre Court in a quarter-final that had been enthusiastically built up as a blood feud with Romanian Simona Halep.

After Ile Nastase’s poisonous tirade of swearing at an April Davis Cup match that reduced Konta to tears and which Halep pointedly refused to condemn, there could be no love.

Venus Williams had minutes before Konta and Halep arrived ended the run of Latvian Jelena Ostapenko, who had reminded people that at home she is called Alona, not Jelena, which immediately cast her as the Garbo of tennis. ‘I want to be Alona...”

She got her wish in the boom box that Centre Court became, Williams and Ostapenko varying between over the top and flat out tennis.

Ostapenko’s powerful groundstrokes often beat Williams for mph but Williams serve and ultimate poise ended the 20-year-old French Open champion’s tournament. A 37-year-old against a 20-year-old, it seemed almost unfair as a match of sound and fury fell 6-3, 7-6 to the American in 73 minutes.

The twirl of her white skirt and wristy wave made it seem that a 12 round heavyweight championship fight had not just happened.

For Konta the challenge was more angst-ridden and frayed against the number two in the draw. Not just the tangled past and perhaps righteousness on her side but the freight of history bore down and maybe too the fear of misadventure so close to home.

But she has always been a tower of sense, a refusenik to hype and in a tight roller coaster fight, Konta won the margins. Despite an unforced error count that spiralled to 36 against Halep’s nine, Konta finally won just two more points than her opponent over two hours and 38 minutes.

Little separated them until the end of the match, tiebreaks in the first two sets handing them each a foot in the semi-final. But at 3-2 in the third set, it was Konta who earned two break points, taking the first of them and claiming the higher ground.

Working the fractional momentum shifts, she toughed out Halep’s busy response to retrieve her service game.  But by then the match had fallen to mindset and attitude and it was the British player who didn’t blink. Taking the crowd with her, she built the set to a final service game at 5-4.

Konta lost the first point but keeping to her highly stylised routine before serving, the next four noisy points fell her way, a limp forehand from Halep into the net as someone screamed in the crowd, a confusing end after a high wire act.

Halep, however, was not pleased with the chair umpire’s response to the final point feeling that it should have been replayed.

“I was surprised the lady was screaming,” said the Romanian. “I think it is normal to repeat the point when someone is screaming like that. He said we cannot replay. We cannot change anything, so why do I fight.”

Konta, once a talented player, who fatally could never close a tight match, has blossomed beyond all expectations. She broke the tough Halep twice from eight chances with Halep getting a look at Konta’s serve just two times in the match.

“We’ve had a few battles in the past and I’m looking very forward to meeting her,” she added about her semi-final with Williams. “I played her twice this year already so I have been on court with her but I haven’t played her in grass so that will be a new challenge for me.”

On Halep, the past had no influence on the outcome. No feuds. Just tennis.

“I was prepared for her to really challenge me and make it really difficult. I stuck with that from the first ball to the very last ball. You do have to win it against Simona, she gives you nothing.”

“I heard a scream off my side of the court,” added Konta about the final point “But the crowd were over enthusiastic, moments which happens with every match. It’s a part of sport, the crowd getting excited. I was just playing the next ball because we’d experienced it a couple of times.”