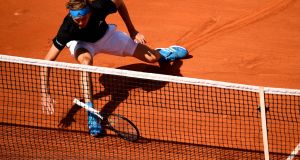 Germany’s Alexander Zverev slips at the net during his men’s singles quarter-final match against Novak Djokovic of Serbia at the French Open. Photograph: Clive Mason/Getty Images

Despite sending mighty serves crashing down from a great height, towering world number five Alexander Zverev could offer only momentary resistance to Novak Djokovic in Paris, as the top seed barged into the semi-finals of the French Open on Thursday in straight sets.

“He was serving very well, it was a big challenge for me to find the right returning position,” Djokovic said on court afterwards.

“I was 4-5 down, then I played five or six games perfectly, hitting clean balls. It was very windy but it felt good to play [after Wednesday’s wash-out].”

So, business as usual for the man who hasn’t lost a Grand Slam match since a last-eight loss here last year.

That disappointing defeat on a cold, darkening evening by Marco Cecchinato proved only a prelude to winning Wimbledon, the US Open and January’s Australian Open.

Thursday’s victory over Zverev was a 26th consecutive one in Grand Slam action, and it will take a mammoth effort to end that run.

The man tasked next with stopping him is Austrian Dominic Thiem who, at world number four, is ranked one place higher than Thursday’s victim.

Familiar faces occupy the bottom half of the draw with Roger Federer due to face Rafa Nadal in the first semi-final.

Thiem produced a claycourt masterclass to overwhelm Khachanov 6-2 6-4 6-2 and reach the semi-finals for the fourth year in succession.

Having struggled early in the tournament, Thiem has warmed to the task and was far too solid for the 23-year-old Khachanov, who was unable to replicate the tennis he produced to beat Juan Martin del Potro in the previous round.

Thiem, runner-up to Rafael Nadal last year, hardly put a foot wrong throughout a one-sided contest as he set up a clash with Djokovic.

Khachanov had won their only previous meeting, also in Paris but on an indoor hardcourt. However, Thiem on clay is an entirely different proposition and from the moment Khachanov struggled to hold serve in the opening game his prospects looked bleak.

The razor-sharp Thiem broke serve in the third game and never relinquished control, offering Khachanov not even a sniff of a break point throughout a clinical display.