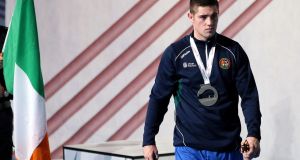 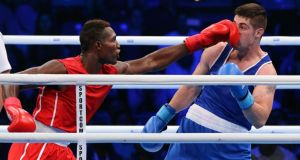 Joe Ward looks at Hamburg and doesn’t see the ever-moving figure of Julio La Cruz in front of him and then not, but through the prism of the year that has just gone.

Outside the personal hurt of his second world final defeat is a career in which he has won three world championship medals and three European titles.

For a 23-year-old it is a stunning haul that has Ward better known around the boxing world than in his own country.

However, it is not enough and with the mercurial La Cruz always on the horizon and everyone, even now, looking towards Tokyo 2020, Ward knows the four-time world champion and Olympic gold medal-winning Cuban will always be the one he must beat.

That task is to overturn the Hamburg final scoreline of 29-28, 29-28, 29-28, 30-27, 30-27, where there was no dissent among the five judges. But Ward sees natural processes of age and experience aligning over the coming years, with his performance levels moving him forward and La Cruz’s drifting back.

The Irish light heavyweight is adamant there is a world title and Olympic medal in his locker despite the mesmerising La Cruz.

“He has that little bit more experience. He can use that as a benefit to him,” said Ward after the final.

“Look, he is going to get slower. He’s 29 years old. Another three years and he will be 32. I’m still only 23. You can see the improvement. You are not going to peak in boxing until you are 26.

“So, as I said, I am not a million miles away. He is going to be slowing down and I’m going to be still improving and getting hungrier in every fight.”

There is lightness to Ward and a clear vision for a pathway over the next three years. As he talks on the bridge looking towards Hamburg’s Central Station in an early morning walk of the city, he looks towards a holiday in the short term. Long-term, his reasoning is sound and ambitious.

A changed mind and a changed body have revealed things to him. Greater potential is one of them.

“For me this has been a great year,” he says. “European champion and a world final. There are not too many people who can turn around and say ‘I achieved them’.

“I boxed really well throughout the tournament. The guys I came up against, they were some really tough boxers. My conditioning was very good. My boxing ability was really great. It has been a magnificent year.

“Not making it in a world final is nothing to be ashamed of against probably the best pound-for-pound boxer in the world.

“Absolutely I’ll go home happy. It’s disappointing to lose a world final. But it’s a special occasion to come into an occasion and give it your all.”

Ward tried to close down La Cruz, corralling him into corners and onto the ropes for nine minutes but never quite landing the decisive blows he was looking for.

La Cruz doesn’t do standing battles toe to toe because he is exceptional winning bouts another way.

As the Irish southpaw made the ring smaller, La Cruz slipped him and, all the time flicking, put shots from his waist. Unorthodox, freakishly quick and fluid, LA Cruz scored from the side, drawing away and in jolting lurches forward with his right.

Ward scored all right, but his frequency was lower and in the end La Cruz was never quite where Ward wanted him to be. No complaints.

But the Moate boxer is correct that when or if the Cuban slows, even fractionally, he will become vulnerable, and Ward believes he has the measure of everyone else.

“There is no doubt in my mind that I will beat him,” he says, and it’s not another hollow prediction.

It is also worth noting that Billy Walsh, coach of the well-resourced USA team, won no more than a silver medal and two bronze, while Russia, post their doping scandal, won no gold medals at these championships.

1 Cheltenham faces criticism after racegoers suffer Covid-19 symptoms
2 Ian O’Riordan: Learning to run for the first time all over again
3 Davy Russell ponders what might have been for Tiger Roll
4 Karen Robinson Walton: I am looking at him. I say ‘Benjamin, what have we done?’
5 Sport will be last duck in the row in return to normality after coronavirus
Real news has value SUBSCRIBE