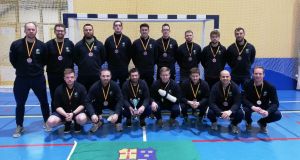 John Jackson and Ross Canning scored in the final two minutes to end the Irish men’s EuroHockey Championships III campaign in spectacular fashion as they defeated Wales 2-1 to clinch bronze .

After a 33-year hiatus from the code, Kenny Carroll’s side ran up their first win on Saturday evening 4-0 against Slovenia to build confidence and earn that third-place playoff.

And they followed it up with a composed performance, despite trying conditions toward the end, finally making their dominance tell on the scoreboard.

They did trail to Jonathan Fleck’s seventh-minute opener and it remained 1-0 until the death as Ireland endured a frustrating second and third quarter with both Mark English and Jackson denied on the goal line. When Neal Glassey served time for a yellow card, it look like the game was up for Ireland but he returned from his suspension to in a vital fourth penalty corner.

English laid it into the path of Jackson to guide home for 1-1. Thirty seconds later, Michael Robson found a foot from which Canning took the direct route to the roof of the net.

Wales only had one shot prior to the final minute but duly won a series of three penalty corners but Stephen West brilliantly charged down each one to secure the medal.

It marked a positive return to the code after the long break and something to build on. Other than Friday evening’s 11-3 blow-out against Scotland when Ireland showed a naïve touch, chasing the game too early, they embarked on a steep learning curve, culminating in the back-to-back wins.

It is pity, though, the side will now have two years to wait until their next formal tournament but the ambition will be to add more fixtures into the annual calendar each winter.