Australian Open: Nadal eased through in straight sets while Dimitrov survived a scare 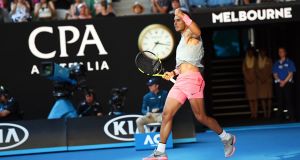 Rafael Nadal of Spain celebrates after beating Leonardo Mayer of Argentina in the second round of the Australian Open. Photo: Tracy Nearmy/EPA

Grigor Dimitrov survived an almighty scare against American qualifier Mackenzie McDonald to reach the third round of the Australian Open.

The third seed, a semi-finalist in Melbourne 12 months ago, came into this season on a high after winning the ATP Finals in November but was well below his best against a player ranked 186.

McDonald won the opening set and then, remarkably, the fourth set to love, but Dimitrov refused to give in and roared when he eventually sealed a 4-6 6-2 6-4 0-6 8-6 victory.

“It’s a tough day,” said that Bulgarian. “I just had to play with what I had today. I’m the most happy with that; winning on days when you’re not supposed to. He was playing unbelievable. I had to fight, and experience in the end really helped me.”

Jo-Wilfried Tsonga produced a terrific comeback to defeat Denis Shapovalov and set up a blockbuster third-round encounter with Nick Kyrgios.

“I think it was an advantage to play him for the second time because I knew he was able to do crazy things like he did today,” said Tsonga of the hugely exciting Canadian.

Now Tsonga must face another of the players looking to wrestle control of men’s tennis away from the old guard.

Kyrgios so far is delivering on his vow to adopt a more mature approach and withstood the distractions of a noisy helicopter, a faulty sound system and heckles from the crowd in a 7-5 6-4 7-6 (7/2) victory over Viktor Troicki.

The 22-year-old said: “I think last year, the year before, I probably would have been still out on the court right now, could be losing that match.

“When he broke back in the third set, I started freaking out a little bit. I played a pretty good tie-break to get out of trouble. I know I have to conserve my energy from the start in best-of-five matches. Just so many ups and downs, it’s draining.”

Kyrgios described Tsonga as one of his idols, and the Frenchman is looking forward to the clash.

“Like today, he’s got fire in the arms,” said Tsonga, now one of the veterans at 32. “I’m very excited about it. It’s good to play against those guys. They are, for sure, the present, but also the future of tennis. I played so many guys when I was young like them.”

World number one Rafael Nadal was tested by Leonardo Mayer but quelled the threat of the Argentinian to win 6-3 6-4 7-6 (7/4).

All the players due to play on Thursday and Friday face the prospect of extreme heat, with temperatures forecast to soar towards 40C.

Nadal, who next faces 28th seed Damir Dzumhur, voiced his hope that tournament organisers will shut the roofs on the three courts that have them if the conditions become too bad.

He said: “I think it’s a health issue. Even though I like sometimes to play with heat. When it’s too much, it becomes dangerous for the health. I would not like to see here retirements, conditions that create a bad show for the crowd.

“The crowd is suffering too. In the courts that we have the roof, why not put the roof when the conditions are so extreme? I’m going to practise indoors tomorrow.”