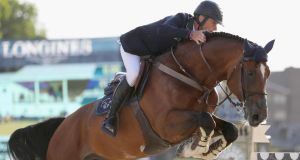 Denis Lynch fared best of the three Irish riders competing at five-star level at the Global Champions Tour in London on Friday when second in the 1.55m jump-off class.

Riding Thomas Straumann’s 14-year-old stallion All Star 5, the Co Tipperary-born rider recorded his second round clear in 39.61 as Nicola Philippaerts of Belgium landed the class on Aikido Z in 39.13. Darragh Kenny finished seventh when having a pole down against the clock on Team de Coquerie.

One of four Irish riders competing at three-star level in Beervelde, Belgium, David Simpson enjoyed a profitable Friday, winning the final competition of the day, the 1.40m accumulator, on the 11-year-old gelding Starfighter having earlier finished sixth with Keoki in the 1.50m speed class.

The Irish squad for next Friday’s Nations’ Cup competition for the Aga Khan trophy at the Dublin Horse Show was named yesterday by team manager Rodrigo Pessoa.

Ireland finished fourth in the last round of the Nations’ Cup series at Hickstead to all but guarantee a place in the world final in Barcelona but Pessoa is hoping for another good result in Friday’s Aga Khan which comes two weeks before the start of the European Championships in Gothenburg,

“Obviously Dublin is very important for us. We haven’t won a Nations’ Cup so far this year. We have been close on a few occasions but if we are to win just one this year our home Nations’ Cup would be the perfect place to do it,” Pessoa said.

“Of course, we have our main objective for the season at the European Championships coming two weeks after Dublin and we are saving some combinations for that but I am happy that we have a strong squad for Dublin and we will not be taking the competition lightly.”

Pessoa has fond memories of competing himself at the RDS and is looking forward to leading out his team in Ballsbridge on Friday,

“The Dublin Horse Show is very special and the RDS is a historic venue. I last competed there myself in 2010 and it will be an honour and a privilege to lead out the Irish team in front of the home fans but most of all I am hoping I can get my hands on the famous Aga Khan trophy on Friday,” he concluded.

The Irish team who won three Aga Khans in a row in the late 1970s were honoured in Dublin yesterday by the Association of Sports Journalists in Ireland.

The team, whose run began 40 years ago in 1977, comprised the same four riders – Eddie Macken, Captain Con Power, James Kernan and the late Paul Darragh. Macken will be joined by British Olympic gold medallist Nick Skelton in giving a masterclass at the Dublin Horse Show next Friday and Sunday.

Following two weekends of international eventing action in Ireland, the spotlight turns on show jumping over this Bank Holiday period with huge numbers competing on horses and ponies in Millstreet, Co Cork.