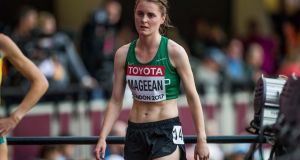 Disaster is a dirty word in the sporting context but Ciara Mageean uses it herself, and with some justification. Everything about her race, her result, and the immediate aftermath clearly left her badly shaken and understandably so.

It certainly wasn’t pretty, or even close. Last to finish in her 1,500m heat killed all of Mageean’s qualification hopes, and made for a worrying start for the Irish team at these World Athletics Championships.

In a race won quicker than Mageean’s own season best by the reigning world champion and record holder Genzebe Dibiba her gradual undoing made for difficult viewing.

There was no excuse, nor indeed explanation, just a mystified look of disappointment and despair. At 25 Mageean had come to London in her prime, yet in no way applied herself on the race, Dibaba winning in 4:02.67 from the South African woman Caster Sememya.

Mageean clocked 4:10.60 in 13th, nine seconds outside her personal best.

“To be honest that was just a disaster out there,” she said, with the white face to match it. “Everyone has seen my season so far, it’s the best shape I’ve ever been in, and it’s been going from strength to strength. So to go out and run that race so poorly . . .

“I felt good early on, the pace was fine, and I was just thinking, ‘stay out of the bother, don’t get caught up in the early bursts or whatever it might be’, but then I just couldn’t get my legs to switch on.”

Britain’s Jess Judd had taken up early on, making it a true run race, which should have suited Mageean: instead she bounced around at the back, fell in and of space and holes, and 13th at the bell, never once got into one of the top-six automatic qualifying marks.

“I was feeling very confident, top six to qualify was very doable,” she said. “It was a tough heat, I’ll give it that. But I should have been in that top six, I definitely should have, I’m as good as all these girls, but I just didn’t.

“Oh god! I didn’t even fathom not making it out of the rounds.”

Having dropped out of the European Indoor 1,500m final earlier this year, her entire season might well feel like a disaster too: “I don’t know why, but my legs just didn’t turn on with two laps go I was thinking this is great, ‘I’m as fast as any of these girls even faster...’ but nothing, absolutely nothing.

“I can’t even grasp that. Everything has been going good. I don’t know what the story is. I’m not here looking for an excuse and I knew I could make it through that round.”

Mark English may well to produce the race of his life to make it out of his 800m on Saturday (1.21pm) as only the top three are sure to progress, and up against English in heat five is title favourite Nijel Amos from Botswana, Pierre-Ambbroise from France and Adam Kszczot from Poland, each of whom have run 1:43 or quicker; English has a best of 1:44.84.