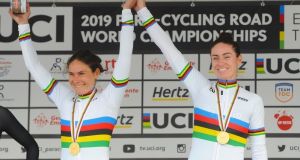 Fresh from a gold and silver medal performance at the Paracycling World Road Championships in Emmen, the Netherlands, last week, Katie-George Dunlevy has set her sights on the biggest target of her career.

The visually impaired athlete plus tandem pilot Eve McCrystal had a highly successful campaign in the Rio Paralympics just over three years ago, taking gold in the time trial and silver in the road race. Since then the duo have reaped considerable success: they won gold medals in both events in both the 2017 and 2018 Paracycling World Road Championships.

Last week they further added to their tally, netting gold in the time trial and silver in the road race. Given that run of form, a gold medal double is not out of the question in Tokyo.

Dunlevy told The Irish Times on Thursday that the 2020 Paralympics was a huge objective.

“It is less than a year away now, so it is definitely in our sights. All our competition, the rest of the world, are going to be pulling everything out of the bag to be as competitive as they can, and so we have to do the same.

“We have got two world championships [track and road] next year, which will be important. It will be a chance for us to see where our competitors are and where we are, and then what we need to work on in the closing stages coming up to Tokyo.

“The championships will be important, but Tokyo is the big aim. That is what everyone is aiming for.”

Dunlevy and McCrystal were the standout performers on the Irish team in Emmen. They dominated the time trial, finishing 55 seconds clear of Kiwi rivals Emma Foy and Hannah Van Kampen. The New Zealand duo did narrowly triumph in the later road race, but only after Dunlevy and McCrystal did most of the riding.

“We worked really hard in that road race,” said Dunlevy. “It was quite a negative race…the course was a really hard one to get away on. We found that even the weaker bikes were still with the bunch. The bunch broke apart, but then everyone came back together.

“We tried to get away at the start. We worked really, really hard in the first three, four laps and then realised that we weren’t going to get away. We thought that maybe a bit later if there was an opportunity to take that we would. But we tried a few more times, and we covered a few attacks from other bikes in the closing stages.”

The Swedish duo got clear, and with other teams looking at the Irish riders to close the gap, Dunlevy and McCrystal had to play tactical chess and refuse to take up all the driving to bring them back. The Swedes were eventually caught, and then the finale played out.

“We were fifth, sixth bike going into the final kilometre and then we worked our way up. We were fourth coming up this really steep hill which was 500 metres to go. We made a move there and went past those three front bikes, but New Zealand were slipstreaming us and just passed us in the last metre at the finish.

“They were very positive afterwards, saying ‘you girls are so strong and you made that race hard. You made it a good race. Thank you.’

“We were the animators in the race. We tried to get away and tried to work hard. It was very simple, we just missed out on the other gold there. But gold and silver…it was a great campaign for us.”