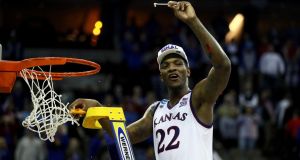 Silvio de Sousa arrived in America from Angola in January 2015. He stood 6ft 9in, had just turned 16 years old, and didn’t speak a word of English. He was, however, fluent in basketball and that’s why he received the opportunity to enrol in a high school in Florida. A power forward already capable of windmill dunks, the plan was for him to hone his skills on the court, gain the requisite academics off it, and then, after a shop window stint at some college powerhouse, bounce to the NBA, a league currently boasting 13 players who were born in Africa.

De Sousa ended up graduating early from IMG Academy, a finishing school for athletes owned by the sporting and entertainment agency of the same name. While plenty regard these institutions as vultures feeding off the dreams of gifted adolescents, others think of them merely as facilitators offering desperate young boys and girls an admittedly long shot at a better life. The problem with the latter interpretation is children on their own in foreign countries where they don’t speak the language invariably end up vulnerable to the wiles of older people looking to make a quick buck.

Enter Fenny Falmagne. A native of the Congo, he played junior college basketball in the US before utilising his Belgian passport for a stint with the Reading Rockets in England’s EBL. Since he retired, Falmagne has become a mentor to young Africans arriving in America nursing hoop dreams of their own. With de Sousa, he ended up becoming his official guardian and, when the blue chip universities inevitably came courting the teenager’s signature, Falmagne was also the hype man talking up the prospect.

“He truly is a freak of nature,” Falmagne said. “His upside is just out of this world. He’s a kid that can put his shoulder on the rim. He can dribble, he can shoot, he can post up, he has great footwork. He can play the game of basketball. More than that, he’s just a great kid.”

An FBI investigation into corruption in college basketball yielded a court case last year that exposed the seedy underbelly of the sport, a demi-monde where sportswear giants, a network of shadowy fixers and desperate coaches conspire to lure the best players to their brands and their campuses. Falmagne’s name cropped up in dispatches when Adidas “bagman” TJ Gassnola claimed he paid him $2,500 to ensure de Sousa went to Kansas University, a school that has a contract worth $191 million to wear the three stripes. Gassnola also alleged that he promised $20,000 more to help Falmagne get out of a previous deal he’d negotiated for the kid to go to the University of Maryland, an Under Armour outfit.

Anybody who pays attention to the sport would have simply nodded their head at this stuff which has been such an intrinsic part of this sordid culture for decades. Everything is underhand and off the books because the National Collegiate Athletic Association (NCAA) has strict amateurism rules designed to prevent players and their families from sourcing any benefits at all from their talent, beyond the (often risible) academic scholarship. Of course, the rules are famously honoured more in the breach than in the observance, and it’s almost funny the way all involved clutch their pearls, feigning shock at each fresh payola scandal before quickly looking for a scapegoat.

That was easy enough this time around. Having sat out the entire season so far while the NCAA looked into the affair, de Sousa has been banned from playing until 2021 despite the fact there is no evidence he ever knew about, saw or touched the money. A sift through his and Falmagne’s bank accounts showed that, and his guardian protested that he only ever asked Adidas for used uniforms and shoes that he could bring to Africa for players there. He also provided proof that that money he did receive was donated to a church.

Whatever the veracity of Falmagne’s alibis, everybody agrees the then teenager in his charge knew nothing of what was going on. Yet, his college basketball career, a crucial stage in his potential development as a professional, has now been effectively ended by this ruling. That penalty is all the more galling because Kansas University received no punishment, nor did Adidas or Bill Self, the coach who was so anxious to get de Sousa into his squad that he drafted him in mid-season back in 2017. Self gets to stay on in a job that pays him a smidgen under $5 million a year. The kid from Angola is hung out to dry for $2,500.

The disparity in the figures is important because so many people in and around the game are making huge sums of money from exploiting players from mostly impoverished backgrounds. Indeed, nothing underpins the glorified racketeering scheme that is college basketball more than the gaudy numbers involved. In a few weeks, the flagship March Madness tournament will generate $800 million in revenue for the NCAA, its ruling body. Over 50 of the coaches currently trying to qualify their teams for that event draw down more than $2 million per year and Duke University’s Mike Krzyzewski, the best paid of them all, is on an annual salary of $8.98 million.

De Sousa had to be sacrificed for chump change so the NCAA could keep the tills ticking over while pretending to be running a clean ship. Amateurs ahoy.

1 Seán O’Brien: Anger over my parents’ break-up never left me
2 Plenty of positives for Farrell as Ireland hit the ground running
3 All in the Game: Klopp’s Amsterdam subs don’t go down well
4 Madness or defiance? The GAA is taking a huge gamble in staging Championships
5 Will Connors chops his way to the front of Ireland’s openside queue
Real news has value SUBSCRIBE

Patrick Cantlay takes Zozo Championship after late ambush 11:10
John Cooney called into Ireland squad for France clash 10:58
All in the Game: Klopp’s Amsterdam subs don’t go down well 10:00
The Offload: Outgoing Tom Grace will be missed by IRFU 10:00
Madness or defiance? The GAA is taking a huge gamble in staging Championships 06:00
Here is your handy guide to sport on television this week