Fair is unfair – Are my Nike 4% runners a sporting advantage?

Ian O’Riordan: Vaporflys are now at the front of almost every competitive distance race 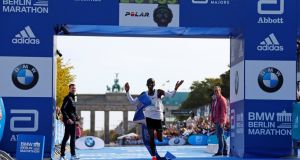 Today is the first day of my competitive running comeback. It’s all building towards a proper assault at a personal record time in the Dublin Marathon in October, and I know Eliud Kipchoge is losing a lot of sleep over that.

Naturally, this means leaving no stone left unturned – and no expense spared. There are no shortcuts when it comes to marathon running, only faster shoes, which is why Nike have just sold me a pair of Zoom Vaporfly 4% for the no-discount price of €250. The neon crimson upper with ice blue swoosh certainly looks flashy and if they do exactly what it says on the box my Saturday morning Marlay parkrun will come in about 4% faster than last week.

It’s fast become a debate in athletics circles, and even if nothing to do with gender, biology, race or indeed human rights, begs the now familiar question: what happens if the fair is unfair? And who ultimately gets to decide?

It’s now two years since Nike introduced their Vaporflys ahead of the Breaking-2 project in Monza in 2017, flaunting every possible legal aid to help Kipchoge run a first sub two-hour marathon – the final frontier of long distance running. In the end Kipchoge clocked 2:00:25, and for all the debate around the fairness of that run (the pace-making was a little sketchy) his feet seemed to be talking the loudest.

Which is why, clever marketing aside, the Zoom Vaporfly 4% can now be found at the front of almost every competitive distance race – even the strictly non-competitive parkrun. The New York Times has also run a number of lengthy features on the Nike shoe in recent months, all pointing at the apparent advantages over rival brands or more traditional models. Last summer, they looked at race data and shoe records of about 500,000 marathon and half-marathon runners on the Strava fitness app, and found the Vaporflys to be producing between 3 per cent to 4 per cent faster times.

Two more specific studies published in December, neither funded by Nike, also found the Vaporflys to be more efficient compared to both a spiked running shoe and a rival brand, by lessoning the amount of energy burned with each stride. Equal among men and women, by the way. Just how much this improved efficiency equates to faster times is still open to some debate, only by all accounts the 4 per cent is roughly credible – the secret not in that flashy upper, but the thick foam of the midsole, on a curved carbon-fibre plate, creating not so much a spring as a levering effect.

No one – including the IAAF, the governing body of world athletics – has yet to suggest the Vaporfly foam and carbon-fibre plate is the sole reason behind the record-breaking runs of Kipchoge, Kiptum and Muir, or any personal record times at Saturday morning parkrun. The IAAF rule is also a little vague in that it states “any type of shoe used must be reasonably available to all in the spirit of the universality of athletics”. But is it fair or unfair that only Nike-sponsored athletes get to wear them? Or that some runners might not be able to afford them?

Even if it’s just some sort of placebo effect, or what might be termed psychological doping (not to be confused with financial doping, technological doping, or good old-fashioned doping), the Vaporflys present another reminder that sometimes the fair is unfair, at least until someone decides otherwise. It’s now 10 years since FINA, the governing body of swimming, banned the full-length sharkskin-inspired swimsuits, and the Vaporflys may someday go the same way.

There is, however, a big difference between foam and testosterone, and the now raging debate around Caster Semenya and other athletes with differences of sexual development and whether or not they should be free to compete without undergoing hormone treatment to bring their testosterone levels within what is considered normal female range.

At the IAAF versus Semenya case heard at the Court of Arbitration for Sport in Lausanne this week, it was argued that in women’s events from 400m to the mile the advantage in having circulating testosterone levels in the normal male range rather than in the normal female range could be as high as 9 per cent. The outcome here, expected by the end of March, is not about what’s fair or unfair, but who gets to decide, 100 per cent.