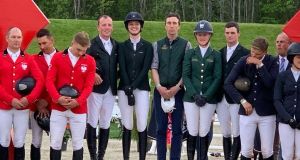 There were mixed results on the Nations’ Cup scene for Ireland’s show jumpers on Friday with a win for a relatively young team in Drammen, Norway in the evening following a fourth-place finish for the squad in La Baule, France earlier in the day.

Led by chef d’equipe, former Army rider Shane Carey, Ireland shared the lead at the halfway stage at the three-star Norwegian venue where 14 teams started. Tyrone’s Jenny Rankin (23) and the Deirdre Bourns-owned Bennys Legacy got the team off to an excellent start, jumping clear with just a time fault. Laois’s Aidan Killeen (29) and Fair Play, owned by H.P.J. Verdellen, were the discard score in the first round with five faults, while Kilkenny’s Susan Fitzpatrick (20), riding her mother Sharon’s Fellow Castlefield, came home with just one fence down. Another Kilkenny rider, Ger O’Neill, was clear on the Martin Egan-owned Irish Sport Horse Castlefield Vegas which saw Ireland finish the first round level with Norway on five faults.

The second round saw Rankin jump clear inside the time and when Killeen and Fitzpatrick recorded four faults apiece, Ireland took control. Norway slipped to third place at that stage as a good second round from Poland saw them finish on a two-round total of 13 faults, meaning a fence down for O’Neill would result in a jump-off. The Bennettsbridge native showed no sign of pressure and knowing he could afford a time fault but not a fence. O’Neill did just that and crossed the line with just a single time fault to leave Ireland as winners on a 10 fault total ahead of Poland in second.

Afterwards, a delighted Carey said that the pressure of watching a Nations’ Cup rather than riding in one was a very different experience: “This could be my debut as chef d’equipe and also my retirement at the same time. I must say standing on the sidelines and watching was more difficult than I thought. It was difficult here, they have a new arena and it’s a really good show. It was a strong competition and even though we had four really good horses with four very good riders, it came down to the wire. We had a pole down here and there, otherwise we maybe could have finished it off earlier on but I must say I was pretty confident that we had as good a team as any here.

“Ger’s horse is still relatively inexperienced. It won a Junior gold medal last year with Jason Foley, who rides for Ger, but the horse is still only a nine-year-old as were two other horses on this team. It was a tough course today and they all coped very well. Ger was under a little bit more pressure as last to go as he knew he had to be better than four faults to win it for us but he didn’t look like he was under pressure the way he performed.

"The two girls, Jenny and Susan, did a superb job and I must say Aidan too was excellent with a young horse. The other Nations cannot understand how we can pull out rider after rider that can ride like this, we really have outstanding riders coming through and I have no doubt that some of this team will make the breakthrough to the first team in the near future. I want to give a special mention to all the background team, to the owners, grooms, sponsors and trainers who made this win possible”, Carey said.

Ireland were lying third the halfway stage. Cork’s Shane Sweetnam and Indra Van De Oude Heihoef, owned by The Blue Buckle Group, left all the poles standing, picking up one time fault as the very first combination to enter the arena. Limerick’s Paul O’Shea with Skara Glen’s Machu Picchu, owned by Machu Picchu Partners LLC, lowered a single pole to finish with four faults, before Offaly’s Darragh Kenny with the Ann Thompson-owned Balou Du Reventon, gave Ireland a real boost with a clear round. Anchor rider, Cian O’Connor, had one fence down with Ronnoco Jump’s Irenice Horta to leave Ireland on five faults after the opening round.

Sweetnam got Ireland off to a great start in round two with a foot-perfect clear round. O’Shea then repeated his four fault score from round one and Ireland lost touch with the leaders when Kenny finished with eight faults second time out. An impressive clear from O’Connor saw Ireland take fourth place at the finish.

“It was not a bad result, we didn’t make many mistakes but were just not good enough to win in the end,” commented Irish team manager, Rodrigo Pessoa. “We learned a lot. Cian’s mare was competing for the first time for us at this height and it was good to see that we now have an extra horse capable at this level. Shane’s mare didn’t knock any fences and we can’t blame them for the time fault, it is always tough as first to go.

"Paul had four and four - normally we could expect that horse (Machu Picchu) to give us at least one clear round. Darragh had a very good first round and the horse (Balou) came back in the second round and was not as brilliant. We have a few weeks now before our next (points-scoring) event so we will keep testing new combinations and move forward,” Pessoa said.

There was a win for Ireland in the final international competition at the two-star Balmoral show near Lisburn on Friday when Co Tipperary Olympian Greg Broderick landed the Bottle Green and Horse Sport Ireland Grand Prix on Kerry McCahill’s Charly Chaplin S.

At home this weekend, the third leg of Irish Sport Horse Studbook series for young horses takes place at Cavan where 38 horses have been entered for Sunday’s 1.40m National Grand Prix sponsored by The Underwriting Exchange.

In dressage, Ireland’s Heike Holstein and her 10-year-old home-bred mare Sambuca secured their second podium placing in a week when scoring 70.435 per cent for third place in Friday’s Grand Prix at the three-star dressage show in Compiègne, France.