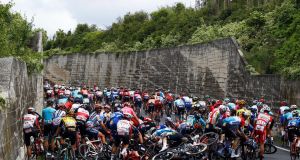 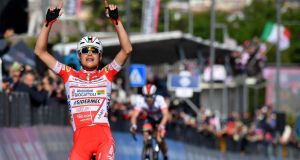 Thursday was a day of double success for Italians at the Giro d’Italia, with Fausto Masnada (Androni Giocattoli-Sidermec) and Valerio Conti (UAE Team Emirates) staying clear all the way to the finish and sharing the spoils. The duo were part of the day’s 13-rider attack and remained out front to the line, with Masnada finishing five seconds ahead of his compatriot and landing the stage win.

Conti had started the day better placed overall and concentrated his efforts on gaining as much time as possible on the overnight race leader Primoz Roglic (Jumbo-Visma). The Slovenian crashed en route to San Giovanni Rotondo, but had already suggested on Wednesday that he would be happy to temporarily surrender his lead and thus take pressure off himself and his team at this early point in the race.

He and the main bunch rolled in seven minutes and 19 seconds back, thus conceding the pink jersey. Conti takes over at the top of the general classification, with nine riders from the break also jumping above Roglic. Conti will start Friday’s seventh stage one minute and 41 seconds ahead of Giovanni Carboni (Bardiani CSF) and two minutes and nine seconds clear of Nans Peters (AG2R La Mondiale).

The successes were notable for Masnada, who had never won a stage in the Giro before, and for Conti. It is his first time to lead a pro stage race, and sees him become the first Italian rider in the race’s pink jersey since Vincenzo Nibali in Torino at the end of the 2016 race.

“I knew Roglic intended to let the Maglia Rosa go to someone else,” he said. “But the whole peloton knew it too. Many of us wanted to break away. Fausto Masnada was stronger than me. For an Italian, the Maglia Rosa is the nicest thing on earth. I’ll try to hold on to it as long as I can, until my legs and heart say stop.”

Irish rider Eddie Dunbar finished safely in the main peloton and moved up the general classification from 96th to 74th. He is 13 minutes and 59 seconds behind the new race leader, and is 17th in the best young rider classification. He is riding the race in support of the Team Ineos leaders but may get an opportunity to chase some stage success later in the race.

Irish road race champion Conor Dunne (Israel Cycling Academy) finished 126th and is 163rd overall. He is a strong breakaway rider and is likely to go on the attack as the Giro continues.

Friday’s stage is an undulating 185 kilometre stage to L’Aquila.