Caster Semenya to run without medication for last time in Doha 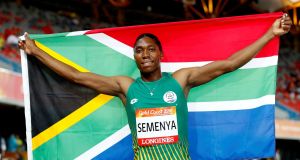 Caster Semenya will compete for the final time without the medication made compulsory by the IAAF on Friday in Doha. Photo: Paul Childs/Reuters

Caster Semenya has made a last-minute decision to run in the 800m in Doha on Friday, which will be the last time she can compete in her favourite event before the IAAF’s new rules requiring athletes with differences in sex development to take medication to reduce their testosterone are introduced.

Semenya’s agent has confirmed the South African has flown to Doha for the first Diamond League event of the season. However she was not at a press conference to hear the IAAF president, Sebastian Coe, welcome the court of arbitration for sport’s verdict on Wednesday as upholding the principle that fair competition in women’s sport should be protected.

“I think this is pretty straightforward and it is very straightforward for any international federation in sport,” he said. “Athletics has two classifications: it has age, it has gender. We are fiercely protective about both. And I am really grateful the court of arbitration for sport has upheld that principle.”

Cas’s ruling means all athletes with differences in sex development (DSDs), such as Semenya, will have to take medication to reduce testosterone for at least six months if they want to run internationally at events between 400m and a mile.

Cas also appeared to offer some hope to the South African by suggesting the IAAF may consider delaying the implementation of its ruling in the 1500m and a mile “until more evidence is available”. However speaking in Doha, Lord Coe rejected that suggestion with a flat-out “no”.

Meanwhile Semenya’s lawyer, Jim Bunting, told the Guardian her team were already scrutinising the 165-page Cas document with a view to a possible appeal to the Swiss federal tribunal, which would have to receive it in the next 30 days. He also urged the IAAF to reconsider implementing its policy over the 1500m and a mile until it gathers more evidence and suggested an independent tribunal should be appointed.

“While a majority of the three arbitrators said it was discriminatory but necessary and was proportionate, all three judges expressed significant concerns and reservations about the practical implementation of the resolution in the certain restricted events,” Bunting said.

“At a broad level we would hope there is still hope. We believe the IAAF should pause and consider carefully what is the correct way to proceed. And we would encourage them to appoint an independent group of experts to look at the 1500m data.”

If Semenya decides not to take hormone medication to reduce her testosterone levels to five nmol/L she could decide to step up to 5,000m without falling foul of the IAAF’s rules for DSD athletes. Another option would be to step away from the sport completely, a prospect she appeared to raise on Thursday when she tweeted: “Knowing when to walk away is wisdom. Being able to is courage. Walking away with your head held high is dignity”.

The British 100m and 200m star Dina Asher-Smith, who is also competing in Doha on Friday, said she did not want to speak about Cas’s decision because she was not a lawyer and did not have “an informed opinion on it”. However she added: “Caster is my friend and I hope she is going to be okay.” – Guardian