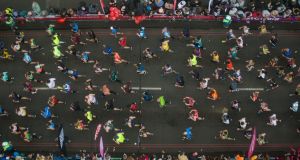 London Marathon organisers are investigating claims about the absence of water stations, and slower runners being ordered on to pavements for failing to keep up with mandatory pace times despite a delay in starting.

Concerns were raised by participants including an official pacer – an experienced runner responsible for helping others finish in a specific time – who told of some of the race’s most vulnerable and slowest runners being “harassed” to speed up and at one point being sprayed with chemicals by cleaning crews.

Elizabeth Ayres, who was an official pacer for the “blue start” wave – with a running time of 7.5 hours – detailed her concerns in a lengthy Facebook post. Despite being told by Virgin Money London Marathon (VMLM) that she would be crossing the start line at 10.48am, it was not until 11.04am that they did so.

“Before I was even 5k into the race, I was being told to move to pavements,” Ayres wrote, saying the marathon’s cleaning crew then moved around her and other runners and began to clean in front of them.

She added: “We got to mile 3 and there was no sign of a water station, it had all packed up and gone!! We had only left the start less than 50 mins ago.”

“VLM essentially called me a liar, they said all water stations were open and if they did have to close then water would be left. No water, no station. Thankfully no one needed it at that point but I was now worried about what lay ahead.”

Ayres claimed problems mounted up over the coming miles, with an absence of water stations and a sweeper – the vehicle that follows the back of the marathon to pick up runners who fall behind the category of times in which they are running – coming very close behind.

Eventually, she had a conversation with a VMLM representative, who had got out of his car and told her she needed to increase her pace or move on to the pavement for the rest of the race.

“I obviously was not happy about this, why have me if you’re going to end up making people lose out on the full experience of the marathon,” Ayres wrote.

“I said that the people I was with had raised thousands of pounds for charity, paid their entry fee and likely bought LM merchandise, and now they are getting treated abysmally because they can’t run a 3hr or 6hr marathon.”

Ayres said that when she reached Tower Bridge, the point at which runners looked forward to getting their marathon photograph, she and others were blocked for several minutes by sewage collection lorries and ended up having to weave through moving vehicles.

She added: “Miles 13 through to 18 were horrendous! We were sprayed with cleaning fluid and water from the clean-up vehicles, who couldn’t make up their minds if they had water or chemicals.

“One eager beaver decided to keep nudging me with his vehicle and spraying me until watching spectators went crazy and started yelling at him to stop, he then pulled back. Watching St John’s Ambulance volunteers were appalled and checked us for possible chemical burns. Remember, I’m an official pacer with a big blue flag!”

By the time she reached the 22nd mile, Ayres said she was told by a member of her running club who was a marshal that the race would be closing at 6.40pm rather than the 7pm stated, leaving anyone behind her at risk of not getting an official time.

“I had argued and remonstrated with every official I could find along the way about water and the way the clean-up crew was treating us. Now it was looking like some who had battled hard all this way may not get the finish they were supposed to, no photos coming down the iconic Mall,” said Ayres, who said that she then began “ferociously” rounding up runners, with word passing back down a chain of tired participants.

The marathon’s organisers told the Guardian that runners were warned the organisers were required to keep to a strict road reopening schedule to return London to “business as usual”. If runners were at seven-hour pace or slower, they were required to move off the road and go on to the pavement in line with instructions sent to out to participants.

Hugh Brasher, the VMLM event director, said: “We work hard to provide the best possible experience for every runner in the London Marathon and we were very sorry to hear about the experience of Elizabeth and a small number of other runners on Sunday.

“A senior member of our team called Elizabeth yesterday to find out more and we are now looking into this in detail as part of a full investigation. We’ll be talking to the people involved to find out what happened and we’ll also be contacting the runners who were in the group being paced by Elizabeth.” - Guardian