Caster Semenya vows to come back stronger after losing case 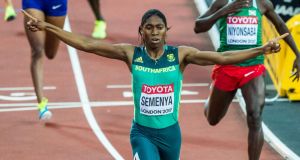 Caster Semenya has lost her legal battle with the IAAF over testosterone levels. Photograph: Morgan Treacy/Inpho

It’s been almost a decade in the works and still the decision may not be final.

In losing her case against the IAAF, the governing body of world athletics, Caster Semenya will now be required to lower her testosterone levels if she wishes to continue to compete in events from 400m to the mile. In the short-term that much is at least certain.

Already considered a landmark ruling, the Court of Arbitration for Sport (Cas) on Wednesday announced its decision on the requests for arbitration filed by the South African runner, and Athletics South Africa (ASA), against the IAAF.

On a majority decision, Cas dismissed both requests for arbitration, which means the IAAF eligibility regulations for female classification (athletes with differences of sex development, DSD), will now come into effect, having been suspended pending the outcome of the case.

Within hours of the decision, however, Semenya responded with a short statement: “I know that the IAAF’s regulations have always targeted me specifically. For a decade the IAAF has tried to slow me down, but this has actually made me stronger. The decision of the CAS will not hold me back. I will once again rise above and continue to inspire young women and athletes in South Africa and around the world.”

While the Cas decision is considered binding in sport, Semenya does have several routes of appeal, including the Swiss Federal Tribunal, the Constitutional Court of South Africa, or the European Court of Human Rights.

South Africa sports minister Tokozile Xasa added: “Naturally we are disappointed with the judgment. We will study the judgment‚ consider it and determine a way forward. As the South African government we have always maintained that these regulations trample on the human rights and dignity of Caster Semenya and other women athletes.”

In announcing the majority decision, Cas explained is has dismissed the requests for arbitration considering that the claimants were unable to establish that the DSD regulations were “invalid”.

“The panel found that the DSD Regulations are discriminatory but the majority of the panel found that, on the basis of the evidence submitted by the parties, such discrimination is a necessary, reasonable and proportionate means of achieving the IAAF’s aim of preserving the integrity of female athletics in the restricted events.

The IAAF had contended that the DSD regulations do not infringe any athlete’s rights, including the right to equal treatment, but instead are a justified and proportionate means of ensuring consistent treatment, and preserving fair and meaningful competition within the female classification. “There is no dispute that there should be a separate classification for female athletes – a binary divide between male and female,” they added.

Cas had described the case as “one of the most pivotal” any sport has ever heard.

In their brief response, the IAAF thanked Cas for its detailed and prompt response to the challenge, and is “pleased that the regulations were found to be a necessary, reasonable and proportionate means of achieving the IAAF’s legitimate aim of preserving the integrity of female athletics in the restricted events”. The regulations will come into effect from May 8th.

What Semenya brought what was effectively a discrimination case against the IAAF, who in April 2018, announced that athletes such as her will need to reduce their natural testosterone levels, by use of daily hormonal contraceptives, if their future times on the track are to be valid for record purposes.

While not naming any individual, Semenya, now 28, was clearly the athlete to be most impacted by the rule: in explaining the new rule, the IAAF have also outlined how it will be enforced, and the evidence on which they have based their new limits of testosterone on female athletes (5 nmol/L in blood).

However, in its 165-page award, not yet published in full, the Cas panel “expressed some serious concerns as to the future practical application of these DSD regulations. While the evidence available so far has not established that those concerns negate the conclusion of prima facie proportionality, this may change in the future unless constant attention is paid to the fairness of how the regulations are implemented.

Reference has been made to the following main issues:

2) The difficulty to rely on concrete evidence of actual (in contrast to theoretical) significant athletic advantage by a sufficient number of 46 XY DSD athletes in the 1500m and 1 mile events. The Cas panel suggested that the IAAF consider deferring the application of the DSD regulations to these events until more evidence is available.

3) The side effects of hormonal treatment, experienced by individual athletes could, with further evidence, demonstrate the practical impossibility of compliance which could, in turn, lead to a different conclusion as to the proportionality of the DSD regulations.

The Cas panel was also restrained in its task, due to the strict framework of the arbitration, to solely determine whether the DSD regulations were invalid or not. It nevertheless considered it appropriate to highlight its concerns with aspects of the DSD regulations which arose from the submissions and evidence adduced by the parties during the Cas proceedings.

The new regulations will only apply to women’s international track events from 400m to the mile, and doesn’t necessarily ban women with DSDs from competing: they will still be free to race in national competitions, in events other than 400m to the mile, and in male or ‘intersex’ classified races. For all global times and record purposes, however, the new regulations will apply.

Arbitration proceedings began in the Cas offices in Lausanne in February, the decision originally due on March 26th; however that was delayed after both parities filed additional submissions and materials and agreed to postpone the issuance of the Cas award until the end of April. Most of the criticism of the IAAF stance wasn’t so much their quest to protect the category of women in sport, but rather the methods going about it, especially given the relatively little research done on whatever implications there might be of lowering testosterone levels in women’s with DSD.

The IAAF first introduced the testosterone limit following Semenya’s breakthrough runs in 2009, when as an 18 year-old she won the World Championship 800m in Berlin in 1:55.45. That was also followed by leaked reports of gender testing on Semenya, which revealed she had no womb or ovaries but internal testes and high levels of testosterone.

That IAAF policy on hyperandrogenism was successfully challenged by Indian sprinter Dutee Chand at Cas in July 2015, who deemed her high testosterone levels to be natural, and gave the IAAF two years to produce more evidence to prove it was unequivocally performance enhancing.

The only women who have consistently got close to Semenya over 800m are Francine Niyonsaba from Burundi, who finished second in Rio, and Kenyan Margaret Wambui, who finished third, both also understood to benefitting from the effects of hyperandrogenism. In 2018, Niyonsaba was the second fastest in the world over 800m with her 1:55.86; the fastest European was Renelle Lamote from France, who clocked 1:58.83.

Regardless of any appeal, Semenya may simply target the 5,000m for the rest of the season, and with that perhaps open an ever wider debate and future decision for Cas.