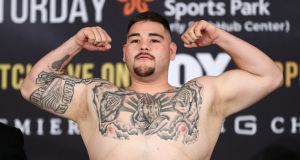 Anthony Joshua never imagined his American debut at Madison Square Garden on June 1st would be like this: defending his four world heavyweight titles against long-shot Andy Ruiz Jr, who has landed boxing’s equivalent of the lottery.

Picked from a short and meagre list of candidates to fight the unbeaten champion at the revered New York venue, the Mexican with a respectable but underwhelming CV was confirmed on Wednesday as the late replacement for perhaps the dumbest challenger in recent times, the serial dope offender, Jarrell Miller.

Miller – even with hometown pulling power – was hardly a limelight choice in the first place and, once he has served his laughably inadequate six-month ban for failing three drugs tests, he will be shuffled back in the pack.

Ruiz, meanwhile, has already begun to shout loudly about his chances – and who could blame him? As Adam Smith, head of Sky Sports Boxing, said, “Ruiz has snatched the golden ticket.”

A glance at Ruiz’s resume over a decade as a professional reveals a string of wins against second-tier heavyweights in small venues from Tijuana to Tucson, before stepping it up in recent years.

Since losing in his previous world title bid, a majority points loss to the then WBO champion, Joseph Parker, in Auckland two years ago, Ruiz has fought three times. He stopped the weak-chinned Devin Vargas in a round, edged everybody’s favourite trial-horse, the 39-year-old Kevin Johnson, and forced the 36-year-old Alexander Dimitrenko, who once was a contender, to quit after five rounds 10 days ago in California.

Ruiz has lost only once in 33 bouts but, at 6ft and 18st 7lb, he will be looking up at 6ft 6in Joshua – and, more than likely, the referee after maybe six or seven rounds.

The 29-year-old American citizen born and raised in California, says he wants to be recognised as the first Mexican to win the world heavyweight title. Which only makes sense in boxing.

“The chills – I’m really excited for this fight,” he said on Wednesday. “There’s nervousness in me, but they’re happy nerves. This is my chance to make history, I want to be one of those greats like Chavez, Tyson, Holyfield, Lennox Lewis. ”

This is a banana-skin fight for Joshua. All his belts – representing the IBF, WBA, WBO and IBO – are on the line for just the second time in his eighth world title fight, which might be his main motivation on an otherwise low-key evening.

He hasn’t fought since September, when he knocked out the formidable Russian Alexander Povetkin in front of 80,000 fans at Wembley Stadium – in the same ring where he brought Wladimir Klitschko’s long career to an end two years ago.

Since beating Klitschko, Joshua has been trying to emulate the Ukrainian by unifying the title, but efforts to fight either the WBC title-holder, Deontay Wilder, or the linear champion, Tyson Fury, have ended in predictable frustration because of the sport’s tangled politics.

Joshua said before a workout in Sheffield on Wednesday, “Ruiz is a different kind of challenge but one I embrace. We have worked in the gym week on week. The rent will be collected.”

Ruiz will give it a good shot. “I think the fight is going toe-to-toe, two guys smashing each other’s faces,” the challenger said. “I’m going in there to throw combinations like I’ve never done before, to improve my speed.

“Being so tall, he fights like a big robot. With my style, my speed, my movement, I don’t think he’s fought anybody like me. I don’t think he’s good going back. When I do pull out this win, everything is going to change. I’m going to bring the titles back to Mexico. It’s a win-win situation, but the main thing is to win the fight and make history.”

He will make money – probably more than $7m, the purse the veteran Cuban Luis Ortiz mysteriously turned down. Making history might have to wait.

Joshua’s promoter, Eddie Hearn, relieved to sign a credible enough opponent, said, “After a tricky week I am delighted. When we selected [RUIZ], I wanted someone with fire in their heart, someone who genuinely believed he could can win and become world heavyweight champion. Andy showed that desire. In my opinion, this is a tougher test than Jarrell Miller.”

Ruiz’s big day – and Joshua’s slightly smaller day – will be shown live on DAZN in the United States and on Sky Sports Box Office in the UK. - Guardian