New tournament will take place in Dublin, Edinburgh and Amsterdam 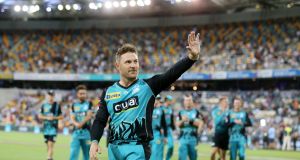 The eyes of the cricketing world will turn towards England next month, as the first ball of the 2019 World Cup is bowled at the Oval in London on May 30th.

Eoin Morgan’s hosts are currently the top ranked nation in ODI cricket, and are favourites to win the tournament – which finishes on July 14th – for the first time this summer.

Their preparation for world domination begins in earnest on Friday, when they take on Ireland in a 50-over clash in Malahide.

But while Friday’s fixture is the first act in an epic cricketing year for the visitors – with the Ashes to follow in August and September – Ireland will cruelly be frustrated onlookers during the World Cup.

The decision to reduce the numbers for the 2019 World Cup from 14 to 10 means Ireland – despite being one of the 12 Full Members of the International Cricket Council (ICC) – miss out, having failed to qualify at the expense of the West Indies and Afghanistan.

In a year when Ireland will play a historic four-day Test match at Lord’s in July, missing out on the World Cup is a huge blow, especially given the headline victories they have achieved in the 2007, 2011 and 2015 editions of the tournament.

However, despite that disappointment 2019 still promises to be a big one for Irish cricket, and on Tuesday morning the inaugural Euro T20 Slam was launched in Dublin.

The Euro T20 Slam is a new competition which will see six city franchises from Ireland, Scotland and the Netherlands – the latter two are also World Cup absentees – play each other over a series of 33 matches from August 30th to September 22nd.

It will be held across three cities – Dublin, Edinburgh and Amsterdam – with the aim of mixing together local talent with some of the game’s more illustrious names, in a fashion similar to the widely successful Indian Premier League (IPL).

Ireland’s two franchises are the Dublin Chiefs and the Belfast Titans, both of whom will play their home fixtures at Malahide, and they are joined in the competition by the Amsterdam Kings, Rotterdam Rhinos, Glasgow Giants and Edinburgh Rocks.

Pakistan great Wasim Akram – who took 421 wickets at Test level – is a member of Euro T20 advisory committee and suggested the Slam will be important in the development of Irish cricket and its cricketers.

He said: “It’s going to be huge for Cricket Ireland, for Scotland and of course the Netherlands as well. In terms of developing cricket nations, Afghanistan and Ireland have moved up the ladder in recent years. But I think after the Euro T20 Slam Irish cricket will improve a lot.

“Irish players will be rubbing shoulders with the modern greats. They’ll get to see how they train, how they work, how their mindset works.”

The six players confirmed for the competition so far are former New Zealand captain Brendon McCullum – once one of the most feared batsmen in ODI cricket – as well as Australia’s Shane Watson and Chris Lynn, Pakistan’s Babar Azam, New Zealand’s Luke Ronchi and Afghanistan’s Rashid Khan.

Each franchise squad must contain at least nine domestic players, with up to seven from overseas. The makeup of each squad will be confirmed via a player draft on June 30th.

This October sees the qualifiers for the 2020 T20 World Cup held in the UAE, and Akram believes the Slam will provide Ireland with invaluable experience as they bid for a place in Australia.

“I do watch Irish cricket on and off and they’re very talented,” he said. “They just needed something like this – it’s consistent, for three or four weeks they’ll play cricket day in day out working with the top coaches.”

There might be no World Cup for Ireland, but there’s still a grand slam to look forward to.