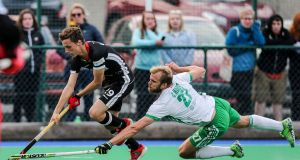 Ireland’s men started their summer campaign with a bang on Saturday as early second-half goals from Shane O’Donoghue and Matthew Nelson saw them beat world number five side Germany 2-1 at Serpentine Avenue.

In so doing, it completed a first ever series win over the Olympic bronze medallists, giving the side a boost as preparations for November’s World Cup begin in earnest.

The Germans had dominated the first half but only had a Timm Herzbruch goal to show for their efforts. But a switch from a zonal to man-to-man line-up paid instant dividends with Jeremy Duncan laying on the pass for O’Donoghue to touch in for 1-1.

In addition to Friday’s 1-1 draw at the same venue, it gave the team another notable scalp. Importantly, they did it without their leading light David Harte who was on club duty, winning the Dutch title for a second time with SV Kampong on Sunday evening.

In his absence, both Jamie Carr and David Fitzgerald had strong games between the posts. John Jackson and Mitch Darling both returned after long absences in the wake of the Olympics to play in the series, rejoining the panel in the build-up to the World Cup.

Reflecting on the team’s work, coach Craig Fulton said afterwards: “Honestly, I am not too worried about the result but we looked at this weekend as eight quarters with different objectives in each of them to try and nail them.

“We didn’t do it all but that gives us something to work on. It’s been a really long club league season; to come in, train and then go into back-to-back games against Germany was a good performance.”