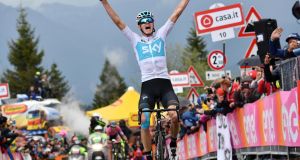 Chris Froome of Team Sky celebrates as he crosses the finish line to win the 14th stage of the Giro d’Italia. Photograph: PA

Chris Froome won the 14th stage of the Giro d’Italia on Monte Zoncolan as compatriot Simon Yates extended his overall lead in the Alps.

With the peloton swiftly breaking up as riders tackled the grueling final climb on the 186km stage from Sanvito Al Tagliamento, Team Sky’s Froome surged clear to win by six seconds.

None of the Irish were in contention with Nicolas Roche’s 136th placing being the best of the lot, he is now in 65th place overall. Sam Bennett is in 105th place and Ryan Mullen is 154th. Bennett is second in the Maglia Ciclamino standings.

Mitchelton-Scott ’s Yates was second – 31 seconds ahead of defending champion and nearest challenger Tom Dumoulin in the battle for the maglia rosa.

With six bonus seconds for finishing second, Yates extended his overall advantage to 1:24.

Froome, who moved from 12th to fifth in the general classification with his first Giro stage win, told Eurosport: “It’s a really, really special feeling winning on top of this mountain, such a monumental climb for the race.

“The team have supported me so well, to get the stage really means a lot.”

Despite victory, Froome remains 3:10 behind Yates and the four-time Tour de France winner added: “Even right to the line, Simon was right behind me.

“I didn’t know if he was going to catch me. It was such a relief to get into that final 100 metres knowing I was going to win the stage.”

3 Blackmore admits to sleepless night as she relived Aintree heroics

Blackmore admits to sleepless night as she relived Aintree heroics 18:37
Matsuyama’s crowning glory at Augusta always seemed his destiny 18:30
Munster and Ireland flanker Tommy O’Donnell to retire at end of season 15:43
France will travel to Dublin to play Ireland after being granted exemption 14:35
Once pain of defeat eases Frampton will be glad it is all over 14:03