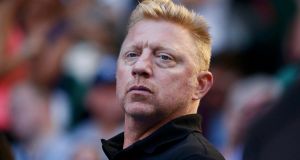 File image of Boris Becker at the Australian Open in Melbourne in 2014. Photograph: David Gray/Reuters

Three-time Wimbledon champion Boris Becker has been declared bankrupt - by a court official who had watched him play on Centre Court.

Lawyers for the tennis player pleaded with a Bankruptcy Court registrar in London on Wednesday for “a last chance” to pay a long-standing debt.

But registrar Christine Derrett, who recalled watching him play at Wimbledon, said it was “with regret” that she had concluded there was a lack of credible evidence that his “substantial” debt would be paid soon and she refused to adjourn the case for a further 28 days.

She announced after a brief hearing: “I make this bankruptcy order at 11.23am.”

She said of Becker: “One has the impression of a man with his head in the sand.”

The bankruptcy application was made by private bankers Arbuthnot Latham & Co in connection with a judgment debt owed to them by Becker dating as far back as 2015.

The 49-year-old German’s lawyers had argued there was sufficient evidence to show that the tennis star would be able to pay the debt soon through a refinancing arrangement involving remortgaging a property in Majorca, which was expected to raise €6 million.