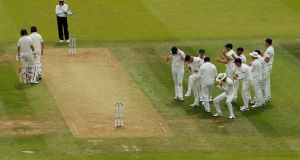 On a day of record temperatures in London, it was three angry bolts of lightning that brought play to a premature end on Thursday night. They were welcome relief to Ireland, who had battled long and hard on the field in a day of unbearable tension for their supporters as they slowly asserted their domination over England.

While Ireland have excelled at times in one-day games and brought off some stunning giant-killings in the last decade, they are novices in the multi-dimensional chess game that is Test cricket.

All day the game teetered on edge, the balance of power shifting delicately as wickets fell and boundaries were hit. The state of the pitch, the weather, Ireland’s fielding frailties and England’s batting blunders all came into consideration by spectators as mental arithmetic was employed to reassess the game after every over.

Where that balance lies overnight, nobody knows, although the bookmakers still make England odds-on favourites.

For that, they would reckon on the pressure of a potential earth-shattering victory preying on the minds of Ireland’s batsmen, even facing a target under 200.

Most of the weak-minded batting in this game has been shown by the men with the three lions on their shirts.

Perhaps the five men who won World Cup medals on this same ground 10 days ago are still in the attacking mode that brought that success, and are yet to refocus their techniques for the different challenges of red-ball cricket.

Perhaps some are befuddled by the prospect of playing in the Ashes, the pinnacle of the five-day game which starts on August 1st.

Or perhaps some just refuse to give the respect due to Ireland’s modest but well-drilled attack, which found new heroes on day two.

Tim Murtagh’s extraordinary display on Wednesday was unlikely to be repeated, and he toiled all day for just one wicket.

Instead it was Mark Adair, a 23-year-old from Holywood, who wrote the epic script and added three World Cup winners to his already bulging wicket collection.

Brother of the former Ulster fullback Ross, Adair was a long time waiting to be an overnight success. He spent five years on and off with Warwickshire but his progress was interrupted by injury and he returned home after just a dozen first-team appearances.

Out of the Ireland set-up, he was a forgotten man but good performances last summer for the Northern Knights won him a tour with the Ireland Wolves, so when Stuart Thompson cried off the England ODI this May he came straight into the team.

The limelight seems to suit him, and his brisk 32 at Malahide endeared him to spectators desperately searching for a new hero.

Since then he has been entrusted with the new ball and picked up 25 wickets in 10 matches, including six so far in this one.

But first, England dominated the morning session with just one wicket lost, in the second over. The nightwatchman, Jack Leach, played an impressively tempered knock, showing the more lauded talents how to build a Test match innings.

Jason Roy scored a fifty in just 49 balls – the fastest by an England debutant – but he fell trying to wallop a Thompson delivery that nipped back and bowled him.

Leach rode his luck, benefiting from a horror missed catch by Gary Wilson and another by Adair, but the youngster redeemed himself three balls later.

Leach went for 92, held at slip by Adair, and the underperforming England middle-order had a second chance to get into Ashes gear.

Unfortunately, that’s not how it worked out as Ireland’s bowlers worked their magic and England collapsed from 172 for one to 248 for eight.

Joe Root called Joe Denly for a single but changed his mind too late to save his partner who fell to a slick bit of fielding by Kevin O’Brien.

Then Adair got one to nip back into Jonny Bairstow, who instantly called for an umpiring review. Perhaps it was panic from the batsman who had also made a first innings duck, but the TV official confirmed his departure and Irish tweeters instantly rechristened him ‘Jonny Pairstow’.

A revitalised Rankin continued to extract good pace and bounce, ripping Moeen Ali out, and when Wilson held a good catch to dismiss Root, and Andy Balbirnie caught Woakes off Adair, there was an expectant buzz among the large Irish support.

In came Sam Curran to play the counterattacking role at which he excels, and Porterfield soon had four fielders on the rope. He and Stuart Broad added a potentially vital 45, with the younger all-rounder hitting two huge sixes.

Curran eventually went for 37 off 29 balls, falling to a long-hop from Thompson which was taken on the midwicket boundary by James McCollum.

But with England on 303-9, just 181 ahead, those bolts from Thor arrived to curtail the day and allow Ireland to regroup ahead of what is now likely to be the final day of his gripping Test.