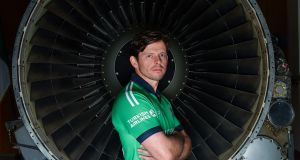 Ireland cricketer Ed Joyce at the launch of the sponsorship deal between Cricket Ireland and Turkish Airlines at the offices of the Irish Aviation Authority in Dublin. Photograph: Brendan Moran/Sportsfile

Cricket Ireland chief executive Warren Deutrom has outlined the steps laid out by the International Cricket Council (ICC) that could see the Ireland achieve full Test-playing membership by the end of June.

Speaking at the announcement in Dublin on Thursday that Turkish Airlines are to become the new headline sponsor of the men’s senior team, Deutrom explained how the pathway to potential full membership will be completed.

Having returned from the ICC chief executives’ meeting in Dubai on Wednesday morning, Deutrom received a call from Cricket Ireland chairman Ross McCollum – an ICC board member – to inform him that the board had voted in favour of the governance changes that would allow for a merit-based application from associate countries who wish to apply for full membership.

It is the first time that the ICC has put exact criteria on what will be required.

“The decision made by the ICC this week to clear the way forward for new full members to arrive by virtue of receiving merit-based criteria is so important because that speaks directly to what we’ve been arguing over the last few years,” said Deutrom.

“It’s going to be about 20 to 25 criteria and it’s going to be across governance, administration, cricket structures, development and performance, financial sustainability. Every prospective member has to be able to satisfy all of those criteria. We’ve done a bit of a desktop exercise in looking into it and we are reasonably encouraged by our ability to satisfy those criteria.

“Once we make that submission it will go through to a brand new constituted membership committee. That membership committee will consider that application and make a recommendation accordingly to the ICC board and to the ICC annual conference, which this year takes place in London, with the AGM happening on June 22nd.

“So, with a fair wind, with us satisfying those criteria – that’s the first hoop to jump through. The second is the membership committee and the third is a decision by the ICC membership. If we manage to hurdle all those barriers then we could be a full member and a Test member by June 22nd this year.”

Among the other matters decided in Dubai was a new revenue model for the next eight years and Deutrom is confident that Ireland will receive an increased amount of funding, regardless of whether full membership is achieved or not.

A total of $280 million (€257.5 million) has been set aside for associate nations and although Deutrom was unable to go into specifics, he said: “It would be what we hope is a very significant increase in funding levels.”

Turkish Airlines’ deal with Cricket Ireland is initially for one year with an option for two more.

Their logo will appear on the men’s senior shirts for the first time next week in the historic One-Day Internationals against England at Bristol and Lord’s.

Cricket Ireland also confirmed that Eir Sport will broadcast live all six games in the Tri-Nations series involving Ireland, New Zealand and Bangladesh, which gets underway on Friday, May 12th when Ireland take on Bangladesh at Malahide.