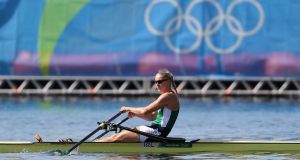 Sanita Puspure competing for Ireland in the Women’s Single Sculls at the Olympic Games in Rio. Photograph: by Christian Petersen/Getty Images

Should young people doing exams continue to compete in sport?

It is a very live issue just now. Recent studies back up the contention that it is possible to combine rowing and academic excellence.

At Portadown Regatta on Saturday the mix will be a real-time one: RBAI asked the organisers if they could provide a room to which rowers could retreat to dedicate time to their books and the club plans to facilitate them.

The entry numbers for Portadown have hit a new high. There are over 200 crews involved and there will be 167 races.

Carrick-on-Shannon and Neptune join Ulster clubs in the draw, and there is a good mix of ages. Portadown is celebrating 140 years as a club and, like so many Irish rowing clubs, has experienced a big upswing in youth ranks. There are now over 100 members.

The 2016 Olympic Games boosted the numbers coming into the sport and in the week ahead the Ireland team compete in a full international event for for the first time since their exploits in Rio.

The first World Cup regatta, in Belgrade in Serbia, begins on Friday, May 5th. The entry is patchy – there are, for instance, no entries at all for the men’s lightweight four, recently removed from the Olympic programme.

Olympic silver medallists Paul and Gary O’Donovan take on 15 other crews, but just one from the ‘A’ Final of the lightweight double sculls in Rio – and Poland have changed one member of their crew. Britain fields two crews, one featuring Peter Chambers (a Coleraine man).

The Ireland lightweight pair of Mark O’Donovan and Shane O’Driscoll have just three crews pitted against them but one of these is the British crew of Sam Scrimgeour and another Coleraine man, Joel Cassells.

The Ireland team member who might benefit most from the competition is Sanita Puspure. The single sculler has a chance to make a new start after her Olympic disappointment.

In Rio ‘her place’ in the semi-finals went to seven-time Olympian Ekaterina Karsten, who pipped Puspure for the third qualification place in a quarter-final held in rough conditions. Karsten, who has taken two gold, two bronze and a silver medal from her extraordinary Olympic run, turns 45 in June.

Puspure (35) could have a very productive year, and a good start would be to put the Belarussian behind her and take a medal.

The Ireland team for the European Junior Championships in Germany in May 20th and 21st will consist of four crews: a men’s and women’s pair, a men’s quadruple and a women’s double. Single sculler Hannah Scott did not make herself available for selection.